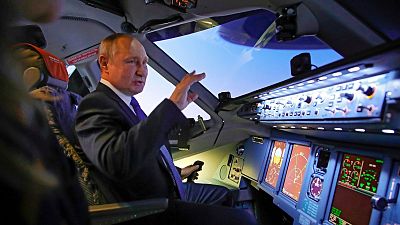 Russian President Vladimir Putin, who signed the new law, in the cockpit of an Aeroflot plane on 5 March.   -   Copyright  AP Photo
By Lottie Limb  with Reuters  •  Updated: 17/03/2022

Putin has passed a new law to keep foreign-owned aircraft in Russia, blocking sanctions which say the planes should be repatriated.

Around 75 per cent of airplanes used by Russian airlines are leased, so the Western sanctions demanding their return are a serious blow to the country, according to an aviation expert Euronews Travel spoke to.

The move to circumvent the rules comes two weeks before a 28 March deadline when the jets, worth around $10 billion (€9.1 bn) in total, are due to be repossessed.

This new law will enable foreign jets to be registered in Russia, in order "to ensure the uninterrupted functioning of activities in the field of civil aviation".

Ireland and Bermuda, where virtually all foreign-leased jets operating in Russia are registered, previously said they were suspending airworthiness certificates on the jets because they could no longer be sure they were safe.

If Russia hangs on to the planes, there could be serious safety and legal consequences.

Re-registering jets in Russia would aim to keep them flying domestically by granting access to new safety approvals.

But adding Russia as a second host country could put Moscow at odds with international rules barring the registration of civil planes in more than one country at a time.

Unless Western lessors agree to Russian requests to release their jets from foreign registries - widely seen as unlikely while they struggle as it is to regain control of assets - the new policy also paves the way for a major contractual debate.

"It is illegal to register an aircraft without proof of deregistration from the previous registry as well as the agreement of the owner. This would be a default under leasing contracts," says aviation adviser Bertrand Grabowski.

A catch-22 dilemma for airlines

Technically, the new law does not instruct airlines to re-register their planes without the permission of owners led by Dublin-based AerCap, the world's largest air lessor.

But experts said it puts the onus on the airline to apply for new registration to keep flying inside Russia - at the risk of poisoning relations with powerful lessors once the crisis is over - or else do nothing and see their fleets grounded.

Not all of Russia's 35 airlines, about 15 of which represent 95 per cent of the country's traffic, are relishing what experts have already warned could spiral into aviation's largest default.

It is the first step to the kidnapping of the airplanes.

"We hope to avoid registering our planes in Russia; we want to return them to leasing companies," a source at one of the airlines told Reuters.

"The airline would become an accomplice. The law provides a way to register in Russia, but does not oblige the airline to do so....It is the first step to the kidnapping of the airplanes."

Moscow's government insists special measures are needed in the face of sanctions on the economy that President Vladimir Putin has described as "akin to a declaration of war".

Lawyers say a three-way legal battle between airlines, lessors and insurers could last for a decade.

How much are the planes worth?

The Russian Federal Aviation Agency said 776 planes were registered abroad as of 24 February, the day Russia invaded Ukraine. Of these, 515 are leased from abroad.

Dozens of older planes that found homes in Russia during the pandemic may never be returned and are said to be worth less than their owners may be able to claim in insurance.

But the world's 11th largest aviation market also includes some of the newest jets including a state-of-the-art Airbus A350 delivered to Aeroflot on the day of the invasion.