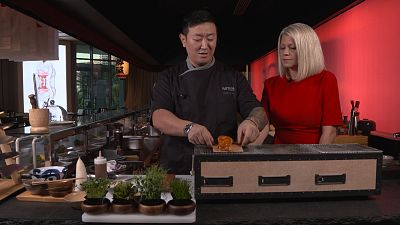 Katsuya has built up a reputation for its contemporary spin on traditional Japanese cuisine.

A celebrity favourite across the US, it has now opened a new restaurant in the Hyde hotel in Business Bay, Dubai, headed up by Chef Pavel Nigai.

Combining his culinary skills with Master Sushi Chef Katsuya Uechi’s authentic cuisine, Chef Pavel has helped his team quickly cement their status as one of Dubai’s most popular restaurants.

With a menu that includes speciality sushi and sashimi platters, it’s also known for its signature Miso-marinated Black Cod. The Alaskan cod is marinated in a paste made up of a mixture of white and red miso paste, sake and honey. It’s then refrigerated for 24 hours to soak up the flavours before the cooking process begins.

After removing any bones and adding a miso reduction sauce, Chef Pavel uses a traditional Japanese Robata grill to cook the fish. Robata is short for robatayaki. This translates as ‘fireside cooking’ in Japanese, as the cooking is done over hot charcoal. This rustic style of cooking originated in Hokkaido in northern Japan.

“[This is] what gives us a flavour of all the fish and smoked texture and keeps it, you know, like stops the cooking process for make the fish not dry”, Chef Pavel said.

The dish is served in a smoking glass dome for ultimate dining effect, living up to the Katsuya mantra: ‘Japanese cuisine. American palate. International appeal.’

How to make Nikkei scallops with Clay chef Jolbi Huacho