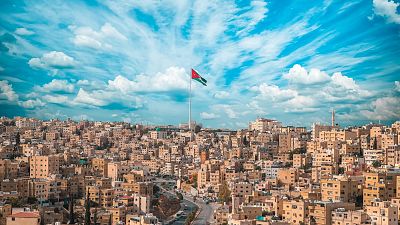 Running along the coast of the Dead Sea is the ancient civilisation of Jordan. As well as being home to some of the most well-preserved archaeological sites of the Roman Empire, it's now a thriving economy with the capital Amman at its centre.

Jordan is considered one of the most liberal countries in the Arab world and is an exceptionally safe place to visit, compared with many of its neighbours in the Middle East.

With a small population of only 10 million, Jordan is a destination for nature lovers and history nerds.

You’ll visit world-renowned biblical sites and lush nature reserves, and be welcomed by the generous spirit of the Jordanians. Social entertainment plays a big part in daily life, so if you’re lucky you can expect invitations for dinner, or to pop in for tea and coffee, experiencing the country’s unique hospitality.

Here’s everything you need to know to plan your trip.

Where are the best places to visit in Jordan?

Explore Petra, one the seven wonders of the world

You can’t go to Jordan and not pay a visit to the extraordinary archaeological site of Petra, in the southwestern desert. It dates back to around 300 BC and used to be the capital of the Nabatean Kingdom.

Petra is carved into pink sandstone cliffs and has become known as the ‘Rose City’ as a result. It is half-built, half-carved into the rock, and surrounded by mountains riddled with passages and gorges.

As a UNESCO World Heritage Site, the ancient city is now recognised as one of the New Seven Wonders of the World.

Float in the Dead Sea

A portion of Jordan’s western border is lined by the famously buoyant Dead Sea, a place to float on your back and bob up and down peacefully.

The Dead Sea’s salt concentration is 34 per cent, which is nine times as salty as the ocean. Sealife cannot survive in this body of water, hence the name, but you can float buoyantly on the surface in complete safety.

You’ll notice your ability to float as soon as you get into the water. You only have to be a foot deep and you can sit down, lean back, and float away. It’s impossible to swim though, so don’t give it a try - and try not to get any water in your eyes (it will burn).

Amman beach is the best spot to take a dip if you don’t want to pay entrance fees.

Amman beach is the best spot to take a dip if you don’t want to pay entrance fees. It’s easily accessible, there are free sun loungers and you can rent a towel and locker for the day. Otherwise, OH Beach is the pricey option if you’re looking for a more luxurious day out. With immaculate sandy beaches, loungers, a pool, and enough bars and restaurants to keep you entertained well into the evening.

Wadi Araba desert is a vast, arid expanse full of canyons, dunes and rocky landscapes. It stretches from Aqaba to the Dead Sea and is part of the Great Rift Valley, which meanders from the Middle East to Southeast Africa

You can take a guided tour on foot, if you’re feeling brave, or else there are jeep and even camel tours. Most guided tours give you the option of camping out in the desert overnight and visiting a Bedouin camp. While you’re there, you might get the chance to taste a traditional Bedouin meal, slow-cooked on hot coals under the sand (usually a selection of meat and roasted vegetables).

Walk all the way from north to south Jordan

Put on your hiking boots and brace yourself for a 40 day expedition. The Jordan Trail passes through 75 towns and villages, connecting the length of Jordan from Umm Qais in the north to Aqaba in the south.

The route isn’t for beginners - it traverses rolling hills, sheer cliffs and dramatic mountains over 675 kilometres of trail. But it’s the perfect way to see the country and absorb its rich history, encompassing ancient walkways and different civilisations along the way.

What do the experts have to say about being a tourist in Jordan?

We asked Jordan’s Minister for Tourism, Nayef Hamidi Mohammed Al-Fayez, about some of the best things to do in this beautiful country.

You can visit the site of Jesus’ baptism and Jordan is where Moses saw the Promised Land from Mount Nebo.

“It’s an impossible question. There are so many wonderful things to do in Jordan.

“If you’re talking about culture and heritage, we have an incredibly rich offering. If you’re an adventurer, the Jordan Trail is perfect for you and gives you some real exposure to local culture. Religious tourism - where to even begin? You can visit the site of Jesus’ baptism and Jordan is where Moses saw the Promised Land from Mount Nebo.

He continues, “We’re so excited to welcome guests back to Jordan so they can experience the country again. We’ve already seen a huge upturn in tourism and we’re looking forward to what 2022 and the future will bring.”

The general climate in Jordan is hot and dry: with long hot summers and short, cooler winters. Its location between the subtropical aridity of the Arabian Desert and the humidity of the east Mediterranean ensures a warmer climate all year round.

Queen Alia International Airport is Jordan's biggest and busiest airport. It is located in Zizya, about 30 km south of Amman.

Petra Guest House is located just a few minutes' walk from the ancient city and looks out over the Petra mountains.

Le Royal Hotel in Amman is a luxurious spot to wind down after you've spent the day exploring Jordan's capital.