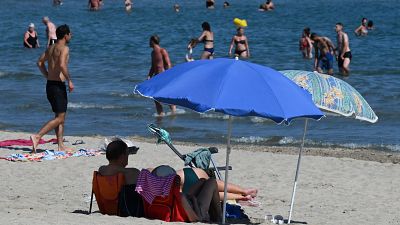 A man and a woman sit on the sand under a parasol on the beach in Palavas-les-Flots, southern France   -   Copyright  PASCAL GUYOT/AFP
By Pascale Davies  •  Updated: 06/07/2021

With summer already underway and UK residents desperate for sunnier skies, there could be a glimmer of hope for that last minute getaway.

An expert claims some 22 countries, including popular destinations such Italy and France as well as countries outside Europe, meet the government’s threshold for moving from the amber to green travel list.

Aviation consultant and former chief strategist for British Airways Robert Boyle told The Telegraph he has used an algorithm based on the data he says the UK government uses for the traffic light system. This determines which countries are safest for international travel.

The criteria states a country has to have an infection rate lower than 20 cases per 100,000 people and have a positive COVID-19 testing rate of less than 1.5 per cent.

“There seems to be nothing in the data the government says it is using that explains why they are languishing on the amber list at this point,” he told The Telegraph, adding, “there doesn’t even seem to be any obvious political logic for why two apparently similar countries get classified differently.”

"Anyone that claims they've cracked the algorithm are talking nonsense. There is no algorithm the government is using," Charles told Euronews Travel.

He said political, economic and health reasons are what determine the travel list for the UK and other countries, adding it was "no coincidence" that Germany removed quarantine on entry for UK citizens five days after British Prime Minister Boris Johnson met with his German counterpart Angela Merkel.

Charles said he is "certain" that there will be changes to the travel list on July 15, when the UK will review which countries are safe to travel to.

In the last review on June 24, 16 countries or regions were moved from amber to green, including, Malta, Madeira and Spain’s Balearic Islands.

But Charles said any changes need to be made "urgently to salvage the summer." If the UK government doesn't, UK residents will not be so willing to travel and will also request refunds on pre-paid tickets, which will hurt the already wounded airline and travel industries.

He also urged the government to scrap COVID tests for passengers who are fully vaccinated as the cost and nuisance of it might deter travellers.

Which countries could be on the UK's green list?

What is the traffic light system?

Current rules state that returning from an amber list country means you would have to quarantine for 10 days, take a COVID-19 test as well as two further tests on day two and eight of arrival - and fill in a passenger locator form.

But from a green listed country, no quarantine is needed, unless the required COVID test is positive.

Last week, the UK’s transport secretary Grant Shapps warned the rules could change at short notice and green listed countries could revert back to amber.

Shapps has said he would not yet book a holiday for himself but said the choice was up to individuals.

“We must be aware that, when you travel abroad this year, there are complications because of this pandemic that, a couple of years ago, wouldn’t have existed and wouldn’t have been a factor. But it is for individuals to make that decision,” he told the BBC.

The UK government has dubbed ‘Freedom Day’ on July 19, a date where many restrictions will be lifted in the country as vaccinations take effect.

Prime Minister Boris Johnson also told a coronavirus briefing on Tuesday 6 July that plans are being worked on to scrap quarantine for travellers returning from amber list countries but not for red-listed countries.

He said: “We will maintain our tough border controls including the red list, and recognising the protection afforded by two doses of vaccine, we will work with the travel industry towards removing the need for fully vaccinated arrivals to isolate on return from an amber country.”

Vaccinated Brits no longer need to quarantine from amber countries