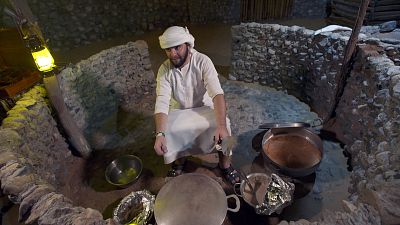 Similar to New York in the 1900s and Singapore in the 1930s, Dubai is currently experiencing dramatic growth. The city’s skyline is filled with the world's tallest buildings and it is home to over 200 nationalities. Native Emirati residents now account for just 15% of the population but they maintain strong ties with their heritage.

Before oil was discovered in the early 1960s and the formation of the United Arab Emirates in 1971, there was a large community of nomadic Bedouin tribes in the surrounding Arabian desert. Bedouin is the English term for 'those of the desert'.

The harsh environment of the desert often reaches over 50 degrees celsius. Roaming bedouins had to be resourceful to ensure their survival, especially when moving camp, which meant tribes traversing sprawling dunes for many miles.

Ragag bread was one of those recipes. It has been cooked the same way for centuries, and is still a favourite in an Emirati kitchen. Its ingredients are simple: flour, water and salt. The high content of salt helped preserve the bread so that it would last several weeks and had the added benefit of helping replenish body salts lost by sweating in the hot sun.

In the past, a desert meal would have consisted of regag bread dipped into some milk or yoghurt. For celebratory meals the bread would have been broken up and served in lamb stews. Today, cheese, honey or eggs are sometimes added once the bread is cooked. The final dish looks similar to a crepe and is eaten hot.

The bread's ingredients and their proportions would vary slightly depending on the tribe and their available resources. Many variants of the bread can be found across the Gulf region today and it is still served in some of Dubai's modern 5-star restaurants.