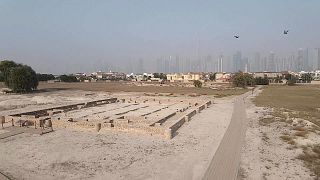 When people think of Dubai it is often thought of as a new city. But, in fact, its history goes back more than 5,000 years. Archaeologists have unearthed a series of exciting and mysterious discoveries across the Emirate. These include the Jumeirah Archaeological site, which dates back to the Abbasid Period in the 10th century AD, to the Saruq Al Hadid site – a centre for human inhabitants and trade and metallurgy from the Umm Al Nar period (2600-2000 BCE) to the Iron Age.

When the Jumeirah Archaeological site was discovered, experts noticed that the walls of the buildings there were plastered.

Dr Mansour Boraik, an archaeology specialist from Dubai, said: "It was plastered inside and outside with white plaster. When they tried to picture the city during the Abbasid Period, and they imagined that it would look like a white city from the shores of the Gulf."

The site shows Dubai during the Abbasid period which is around the 10th century AD. The geographical location of the site is important. It sits on the shoreline of Dubai but also on the major trade route between Mesopotamia, India and Oman. It also sits in-between the Arabic and Indian peninsular.

The 80,000 square metre site sits in the shadow of the Burj Khalifa and the imposing Dubai skyline, emphasising the comparison between old and new worlds. The circular and semi-circular tower supports reflect the prosperity of the inhabitants of the time who will have been a mixture of locals and passing tradesmen. A variety of silver coins, pottery, copper, glass and stone artefacts have been excavated.

Saruq al Hadid is regarded as the jewel in the crown of archaeological discoveries In Dubai. This ancient industrial metallurgical centre dates back to the Iron Age and indicates that Dubai was a global trading hub.

Ahmed Mahmoud, Director of Architectural Heritage Department in Dubai, said: “Everybody thinks that Dubai is only 50, 60 years or 100 years old. But when you go deep into its civilisation, you find that it dates back more than 7,000 years.”

More than 18,000 copper, bronze and iron objects have been found on the site, which have now found a home in the Saruq Al Hadid Museum in the Shindhaga area, next to Dubai Creek.

One of the standout treasures is this gold ring, below, which has inspired the Expo 2020 logo.

Hatta is located 115km from Dubai city. It’s a beautiful oasis surrounded by mountains. Archaeologists have uncovered some of the oldest finds in the region here - tombs dating back to 3000BC.

“We have more than 80 tombs here,” says Dr Boraik

“Some of them have been restored. They buried their dead in a foetal position. We found the remains of their offerings, which they would leave with the deceased, such as decorated shells, beads, some bronze artefacts. They left them to accompany the deceased in the afterlife.

Dubai is a city steeped in history uncovered and ready and waiting to be rediscovered by today’s visitors and modern-day settlers.

A taste of nomadic life in the Dubai desert