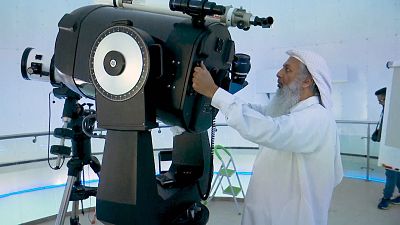 Residents of Dubai recently had a few unique moments of respite from the scorching summer sun, thanks to a rare solar eclipse.

Passionate astronomers and observers travelled to the area from all over the world.

"In countries like India, or countries like the UK or Canada where it is overcast, you hardly get a glimpse of it but the best part about being here, you're gifted with a clear sight of the sun," commented one eclipse observer.

A solar eclipse takes place at the phase of new moon when the moon moves directly between the sun and Earth. This causes the moon to block light from the sun and cast a shadow on Earth.

Similar to a partial eclipse, an annular eclipse doesn't cover the whole moon. This is because the moon is at its furthest distance from Earth, so the sun appears slightly bigger than the moon. As the moon passes in front of the sun it appears as a dark disk with a glowing ring. This appearance is why an annular eclipse has been dubbed the 'ring of fire'.

The last annular eclipse visible in the UAE took place in December 2019 but before that, the previous event happened 172 years ago.

The next eclipse the world will experience is in December but only people at the tip of South America and the penguins in the Antarctic will see it.

For the UAE, the next eclipse will appear on October 22nd 2022. However, only 38% of the sun will be covered. It will be another 14 years until a spectacle similar to the one in June 2020 is seen again from Dubai.

How Mars might hold the key to better understanding climate change