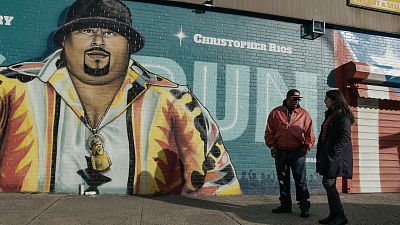 French singer-songwriter Laetitia Sheriff is travelling around the US on the trail of music, history and culture. Next on her tour is one of New York’s lesser-visited boroughs: The Bronx.

“New York is one of the greatest cities in the world, so of course I wanted to visit but I wanted to check out one of its lesser-known boroughs, so I headed to the Bronx… the only borough that can say it’s the birthplace of hip hop!”

The Bronx is the home of hip hop and boasts a reputation as the heart of New York street culture, so it’s no surprise to find that it’s a colourful and diverse neighbourhood, and indeed one of the most vibrant and exciting destinations in the US.

During her visit, Laetitia plunged headlong into all the Bronx has to offer, managing to pack in a must-see hip hop pilgrimage, a visit to a cottage once inhabited by Edgar Allan Poe, and a stroll around the botanical gardens during her short time there. This borough has something for everyone, and makes a welcome change from the crowded tourist sights of Manhattan.

The history of hip hop

On a hot summer night almost half a century ago, a DJ named Clive Campbell played at a party in his building, equipped only with a guitar amp and two turntables. And thus, on August 11, 1973, hip hop was born at 1520 Sedgwick Avenue in Morris Heights in the Bronx.

His innovation was the now ubiquitous technique of breaks: playing a track on two turntables, and repeatedly spinning one of the records back to the break. Needless to say, it went down a storm, and hip hop fans now flock to see the place where Campbell, now remembered as DJ Kool Herc, had his great idea.

Laetitia visited the otherwise nondescript residential block with rap legend Grandmaster Caz: “I had a fabulous time with this great man, who is rich in anecdotes and very endearing,” she said. “He cares about this musical culture and makes an effort to keep the memory of it intact.” Visitors to the Bronx may even be able to get a tour with Grandmaster Caz himself – he occasionally hosts visits for Hush Tours.

Not to be missed: a round-up of our favourite Bronx destinations

From art and culture to music and museums, the Bronx is not short on things to do. Here’s a selection of Laetitia’s top spots:

1. Take a stroll through the Arthur Avenue Retail Market, at the heart of the Bronx's Little Italy (Belmont). Many New Yorkers believe it's the only place in the city to find truly authentic Italian bread, pasta, sausages, pastries and coffee. The local traders will impress you with their incredible knowledge and what’s on offer is as much of a feast for the eyes as the stomach.

2. Think about the Bronx and you will undoubtedly conjure up images of a relentlessly urban landscape. However, it is also home to the New York Botanical Garden, the largest in the US and a true oasis in the city. “It’s a world of its own,” said Laetitia, “There are 250 acres of wetlands, gardens and lush landscapes, home to over one million plants!”

3. Successive waves of immigration in the Bronx have shaped the borough's cuisine, which is as diverse as its inhabitants. Visitors wanting to expand their culinary horizons should try places like Ghanaian Ebe Ye Yie – meaning "It will be all right" – where diners are encouraged to use their hands. Laetitia also recommends La Morada, a traditional Mexican eatery where she tried authentic tacos and a speciality dish from the city of Oaxaca. “The restaurant also organises artistic workshops for children from the area,” adds Laetitia.

4. Edgar Allan Poe Cottage is nestled somewhat incongruously among the high rises of Grand Concourse. The humble farmhouse is where the author lived from 1846 until 1849, writing several works there. Poe and his wife Virginia moved into the cottage in the ultimately futile hope that its "country" location would cure her tuberculosis. The house was saved from demolition in 1913 and moved across the street.

5. The Yankees baseball team are 27-times World Series Champions, and have their home at the Yankee Stadium in the Bronx. Not only can you catch a world-class baseball match here, but you can also take a tour with one of their knowledgeable and experienced guides.

Soundtrack to a city

Check out this locally inspired soundtrack to accompany you on your visit to the Bronx:

• DJ Kool Herc was DJ-ing at his sister's 1973 back-to-school party in the Bronx when he invented the technique of breaking records to allow people to (break)dance for longer. Thanks to this, he is known as the "Father of Hip Hop". He makes an appearance on "Sacrifice" (2008) by Substantial.

• "El Manicero" ("the peanut seller") as recorded by Don Azpiazu's Havana Casino Orchestra (1930) is credited with starting the rumba craze after it was played at The Bronx's RKO Palace Theater.

• A group of high school girls from the Bronx sang "He's So Fine" (1963) by young songwriter Ronnie Mack under the now-legendary moniker of The Chiffons.

• "I Like it Like That" was a hit for boogaloo musician Pete Rodriguez, who came from the Bronx, in 1967.

• Thelonious Monk lived in Lyman Place in the borough. His son, TS Monk, lists "Epistrophy" (1941) as one of his father's best jazz standards.

• Bruce Springsteen's "Lost in the Flood" (1973), a song about the Vietnam War, namechecks the Bronx.