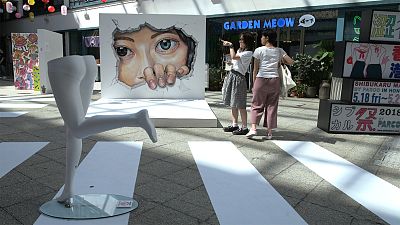 How do you turn an old police living quarters into a hotspot for culture? Hong Kong has done it, and it is among a number of areas in the city where the arts are booming. And it’s just one example of how people here seek work/life balance in a highly energetic and cosmopolitan place. In this Spotlight on Hong Kong, we look ‘’Beyond Business.’’

The Police Married Quarters, or PMQ, was renovated for the art and design crowd. It’s seven stories of creative energy, housing more than 100 businesses.

In this temporary exhibit space at PMQ, Polish artists are showing their posters linking east to west, north to south, coordinated by the head of the graphics department at Poznan University of Fine Arts.

Max Skorwidem from the Poznan University of Fine Arts, describing one artifact, says: "The poster has an individual language that can connect different countries. So I think when we look at the bridge here, it can answer that question very well. The posters are so unique that they can communicate with all of the nations in the world."

And art spills out into the narrow streets here – graffiti, murals, some more traditional, others raw, pop and contemporary.

More culture vulture activity in a moment. But first, we show you something many people don’t immediately associate with Hong Kong – nature, the outdoors - a vital part of the work/life balance. In the outlying areas of the city, nestled in the bays and along the coast, are places like these.

We join Elberti and Tom Uiterwaal of the Netherlands, who have lived in Hong Kong for ten years. Their two sons are sailing this morning, part of their school/life balance.

Elberti Uiterwaal-Postma, Director Project Management, First Advantage, says: "It's amazing to see these kids on the water because, you can feel it’s pretty hot, and they’ll be out there from 9 to 5, but they come back and you’ll see big smiles on their faces."

Tom Uiterwaal, CEO of Reconergy, says: "We have been on holiday to China, just after we graduated from university, and then we got a bit of the Asia vibe …. Going to another place is a gamble. After 10 years we’re still here. And the main reasons I think are one, the business environment, … but on the other hand what we also explored is the balance of life."

Elberti says: "It is work hard, play hard. I leave early in the morning, work long hours and try to find slots in between to spend with the kids. And that’s why being here at the weekend and going out on the water with the children makes it worth living here in Hong Kong."

Back to Hong Kong’s ambitious cultural projects. This one is called the M+ Museum. It’s part of a new area called the West Kowloon Cultural District. Veronica Castillo of Spain plays a key role for M+.

Veronica Castillo, Deputy Director for Exhibition and Collection, M+ Museum, says: This museum is the flagship of the cultural venues that are being built. It’s a museum of contemporary visual culture. It's a different concept of understanding life as it is in HK. Which is with this dynamic of all the different professions, getting together and mingling,"

Hong Kong has also just finished renovating the old central police station into a museum and cultural space. Called Tai Kwun, it’s kept the jail cells as a historical document, and added an evolving collection of works from around the world.

Also among those stirring Hong Kong’s cultural melting pot is an annual event called Le French May. At City Hall, where much of it takes place, we speak with the event’s CEO, Julien-Loïc Garin.

According to Julien-Loïc Garin, CEO, Le French May: "With the booming of the art scene in Hong Kong, we have more and more countries which are bringing festivals. … We brought over 100 artworks from this period of the 1960s, In terms of performances… a show called Les Forains. It’s a 1945 ballet originally with hip-hop, electro-music and a live orchestra."

Perhaps we surprised you about Hong Kong. Beyond Business, beyond the shopping and nightlife, Hong Kong is broadly expanding its cultural dimension.

That’s all the time we’ve got for now on Spotlight. We hope we’ve at least stirred your curiosity to find out more about Hong Kong. Until next time, thanks for watching!