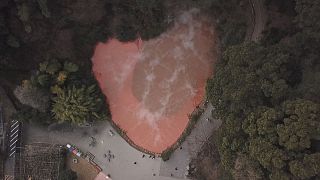 They’re called ‘onsen’. For years these hot springs located on Japan’s Kyushu Island were believed to heal all kinds of maladies. The springs come about due to Japan’s volcanicity. The water is heated deep underground and spurts upwards to create the natural hot baths. The springs aren’t just on Kyushu but appear all over Japan’s islands.

"Beppu has the highest number and the richest variety of hot springs. There's no other place like it. That's the reason Beppu is considered world's number one."

The Beppu spa resort on Kyushu doesn’t only limit itself to the hot springs. Mud and sand baths are also available. Some say these practices, which involve being buried in sand, pull toxins out of the body.

Sand baths in Beppu, Japan were a fascinating experience: you spend 10-15 minutes buried to your neck in the black sand which is hot, wet and heavy with geothermal steam. Those are very popular, so you have to sign up in advance. ♨ #VisitJapanpic.twitter.com/KLLPNgDuZw