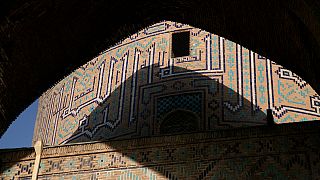 ‘Mirror of the world’, ‘Garden of the Soul’, ‘Jewel of Islam’, the legendary Uzbek city of Samarkand on the ancient Silk Road has earned many such glorifying epithets.

It took the Emperor Timur 35 years to transform Samarkand into a fairy tale capital. From 1370 on artisans and architects from all over came to work here. Today its treasures are being preserved by similarly skilled hands.

It is one of the most evocative cities of the ancient Silk Road and was a kind of “Silicon Valley” of the Middle Ages. The conqueror Timur and later his grandson Ulugh Beg, assembled the greatest scientists and philosophers of the age here.

The city became a crossroads of cultures, religions, and commerce and knowledge. But time and a tough climate have taken their toll on its precious heritage. For the expert restorers the work never stops.

In Registan Square work is going on to recreate one of the tympanum sections of Ulugh Beg Madrasa.

“This is very difficult and meticulous work because we have to be sure that each tile fits together in terms of colour, design and size. Then we plaster it all onto a support and position it on its final location, the tympanum,” says chief restorer Davlat Khakimov.

Every year around 90 restorers work on Samarkand’s heritage sites. Khakimov’s team has taken about 15 days to recreate this tympanum, composed of about 3,000 tiles.

By the end of the year they will have completed another five. Every task has to be done using ancient methods. Even the colours are replicated with old formulas, as Khakimov explains:
“When I started to work here in 1981, everything was in a bad condition. The second floor didn’t exist any more. The facade had almost gone. Since then everything has been restored to the way it looked before”.

The work has brought new life to the charm of the old facades and the messages they contain. The walls of the three madrasas of Registan Square, once Samarkand’s commercial centre, are considered among the finest examples of Islamic architecture. The writings are educational instructions to the faithful, says
historian Fazlidin Fakhridinov:
“The drawings of plants in the shape of endless branches with beautiful green leaves represent heaven’s garden. The spiral ornaments are the symbol of eternal life”.

The tiger mosaics on Sher Dor madrasa are something of an enigma, flouting the Islamic ban on the depiction of living beings on religious buildings. They symbolize the human quest for knowledge and the reward of God’s light.

“On this wall you can see geometric ornaments that you might think are just polyhedric or square decorations, but actually they are letters and words, says Fakhridinov. “Looking more carefully you notice the word ‘Mohammad’, the name of the Prophet”.

About 25 kilometres from Samarkand is an example of modern Islamic architecture. The mausoleum of Imam al-Bukhari is one of the most revered pilgrimage sites in Islam. The memorial complex was built in 1998 on the site of the XVI century mausoleum of the theologian, who spent his life travelling and writing one of Islam’s most sacred texts.

“Imam al-Bukhari collected about 600,000 hadith, the sayings and the deeds of prophet Mohammad. He knew them by heart,” explains Zayniddin Eshonkulov a senior Imam at the holy site.

In 2001 Samarkand was added to the Unesco World Heritage List as Samarkand – Crossroads of Cultures. Its pledge to preserve the past is a promise for future generations.