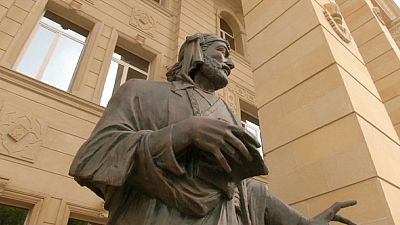 <p>In this second edition of Azerbaijan Life, we travel northwest to the country’s second largest city of Ganja. </p> <p>It was home to the poet Nizami, born here in the 12th century.</p> <p>His tomb was first mentioned in historical chronicles in the early 17th century. Ganja was a place of devoted pilgrimage for many centuries. </p> <p>“Nizami is not just a philosopher. He and his poems are very important. A variety of visitors come to this mausoleum, not just adults but also school children. The first thing people who visit the city for the first time will do is to come here,” says Gulnara Ismayilova, Director of the Nizami Mausoleum.</p> <p>Pilgrims leave flowers on the tomb of the poet, who was versed in many disciplines including mathematics, astronomy and astrology. On a visit from a local secondary school, this teacher believes his legacy provides lessons for life:</p> <p>“Nizami teaches us through his poems. He dedicated some to his son. They have a message for all children to love people. To love their country, the motherland and to be close to your family, to be wise and intelligent, and if someone chooses to listen to these words, then they should try to teach others to follow in his footsteps,” says school teacher Saadaf Aliyeva. </p> <p>Nizami is considered to be the greatest epic poet in romantic literature. It’s believed his writings inspired William Shakespeare to pen his tragic love story Romeo and Juliet. The lyrics of rock guitarist Eric Clapton’s hit song “Layla” are said to have their origins in one of Nizami’s poems.</p> <p>Today, many writers and poets live and work in the city, which is the academic and literary heart of Azerbaijan. Sahib Ibrahimli, a scientist, dramatist and poet, has been writing for forty years:</p> <p>“Living here in Azerbaijan, I get good feelings about the country’s history. I am very interested in our history, in the difficult times which the country has faced and in the country’s heroes. I am doing more research on this subject as I want our young people to know more about Azerbaijan’s past. I want the world and everyone to know about the history of Azerbaijan and to get to know the country better,” he tells us.</p> <p>Words are not the only tool for creative expression. We meet a model maker who uses matchsticks to tell his story.</p> <p>“I am working on an Azeri warrior, and when I make these models I use only matchsticks and their boxes to create them,” says Aftandil Malikov.</p> <p>Away from his workshop dominating the tea house which he owns and taking pride of place is a model of Nizami. It took Aftandil just over a year to complete, using 3,500 matches. </p> <p>As we continue on our visit of the city, closer to the centre, stones from Sochi and bottles from the Champagne region in France have been used to create a poignant tribute of a very different kind. It’s a house that took 30 years to build, a monument to a Soviet soldier lost in the conflict of the second world war, created by his heartbroken brother. </p> <p>Join us in the next Azeri Life as we take a plunge in the country’s famous oil baths.</p>

A game of connections