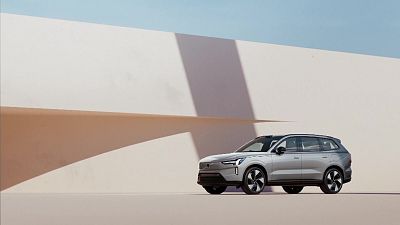 Amid rising energy and fuel costs, Swedish automobile maker Volvo has unveiled a new electric car that can charge homes.

The fully electric flagship SUV was revealed to the world by the company in Stockholm.

With its bi-directional charging hardware, the EX90 basically works as a power bank, allowing the battery to store electricity that can later be transferred back into an owner's home, other electric devices, or another electric Volvo car.

Experts say the new vehicle comes at the right time for the market.

"Now in Europe there has been a great appreciation for electric cars, probably the most in the world… particularly in the segment where they are going to be putting this car, the EX90, there's a big move towards electric cars," said Douglas A. Bolduc, Managing Editor of the Automotive News Europe newspaper.

The seven-seater family car is packed with state-of-the-art sensing technologies such as lidar (3D laser scanning), cameras, and radars to create a real-time, 360-degree view of the world, making it the first Volvo that’s hardware-ready for unsupervised driving in the future.

While its lidar can sense even small objects hundreds of metres ahead on the road, special sensors and cameras inside the car, powered by Volvo’s own in-house developed algorithms, make sure no one is left inside the vehicle.

"In many cases, children are left behind, they're under a blanket, the parents get distracted and they can die either from heat or from too much cold," explained Bolduc.

"They've got a system now that goes from the front end to the back end of the car to determine whether somebody is still inside and give a warning to the person, basically not allowing them to lock the door until they check".

According to Volvo, the same technology is used to sound an alert when the driver is distracted, drowsy, or otherwise inattentive.

The manufacturer says it is basically a "highly advanced computer on wheels".

In-car screens and head-up displays have been equipped with one of the world’s most powerful computer graphics game engines, Unreal Engine, as well as lightning-fast computing power.

Volvo plans to release a fully electric car each year starting with the EX90 this year and sell only fully electric cars by 2030, as a part of its previously-announced ambition to be a climate-neutral company by 2040.

"I think that it's also a vehicle where we trace nickel, cobalt and lithium to make sure that we use as sustainably sourced material as possible,” said Henrik Green, Head of Global Advanced Technology & Sustainability at Volvo.

"We have the Nordic amazing beautiful interior in the upholstery etc, so throughout the whole vehicle we have thought about sustainability".

The EX90 is set to be built in the USA starting next year and later also in China, going on sale in early 2024.