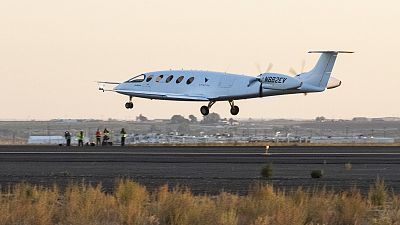 According to Atmosfair, a German climate protection NGO, a passenger on a short return trip between London and Rome has a carbon footprint of 234 kg of CO2.

Israeli start-up Eviation is looking to change this by devising an all-electric plane that can be used on similar short hop flights.

Its battery-powered prototype aircraft "Alice" successfully completed its first test flight in Washington state, the US, this week.

"It was a wonderful experience for everyone who was here. We were able to witness history in the making," Gregory Davis, CEO of Eviation, told the news agency AP.

The concept aircraft flew for about 8 minutes at an altitude of 3,500 feet.

The company is now aiming to develop a battery that can be charged in about 35 minutes for short-haul trips of between 1 and 2 hours.

"We're looking at developing an airplane that will fly 1 to 2 hours, which is typical for that segment. So, 150 to 250 nautical miles with reserves. And that's what we're targeting for our initial entry at the surface," said Davis.

It’s also hoping to become available in the market by 2027 both for passenger and cargo planes.