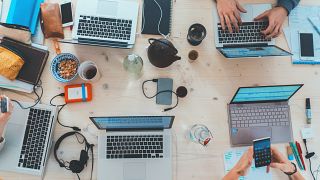 A six-month trial of a four-day workweek in the UK, involving dozens of companies and organisations, is at its halfway point - with largely positive feedback so far.

Eighty-six per cent of the organisations that responded to the campaign’s questions at the halfway mark said they were “extremely likely” or “likely” to consider retaining the four-day week policy after the trial period.

As 41 of the 70 companies involved responded, that means at least half are likely, at this point, to continue with the four-day week after the pilot ends in December.

The trial is being run by the organisation 4 Day Week Global, in partnership with the Autonomy think tank, the 4 Day Week UK Campaign, and researchers at Cambridge University, Boston College and Oxford University.

As part of it, more than 3,300 employees are getting a paid day off every week.

The researchers studying the pilot have been working with each organisation to measure the impact it has on productivity, employee wellbeing, and other impacts such as on the environment or gender equality.

A number of the organisations involved have given the trial a big thumbs up at the halfway point.

Claire Daniels, CEO at Trio Media, said it had been “extremely successful”.

“Productivity has remained high, with an increase in wellness for the team, along with our business performing 44 per cent better financially,” she said in a statement.

One organisation has found it to be “transformational for us so far”.

Sharon Platts, Chief People Officer for Outcomes First Group, added: “We've been delighted to see productivity and output increase and have also been able to make it work in our education and care services, which we thought would be far more challenging.

“While it's still early days, our confidence in continuing beyond the trial is growing and the impact on colleague wellbeing has been palpable".

Another respondent, who asked to remain anonymous, said that the trial had “already shown us that there are things we could have implemented years ago which would have improved our productivity and offered increased value for the organisations we work with”.

The person did acknowledge, however, that there had been challenges, as “radically rethinking the real value of everything you do as a business is never going to be seamless”.

Nicci Russell, the managing director of Waterwise, an NGO, said while the trial is going well, “it wasn’t a walk in the park at the start”.

“We have all had to work at it - some weeks are easier than others and things like annual leave can make it harder to fit everything in - but we're much more settled with it now overall than we were at the start.

“We certainly all love the extra day out of the office and do come back refreshed. It's been great for our wellbeing and we're definitely more productive already,” she said.

Among those who responded to questions from the campaign, 88 per cent said the trial was working “well” for their business so far.

Most of the organisations said the transition to a four-day week had been at least relatively smooth.

There is a highly diverse group of organisations taking part in the trial, including a fish-and-chip shop, large corporations, a legal training company, and an animation studio.

“Essentially, they are laying the foundation for the future of work by putting a four-day week into practice, across every size of business and nearly every sector, and telling us exactly what they are finding as they go,” said Joe O’Connor, the CEO of 4 Day Week Global.

“We are learning that for many it is a fairly smooth transition and for some there are some understandable hurdles – especially among those which have comparatively fixed or inflexible practices, systems, or cultures which date back well into the last century”.

He added that the friction some companies are experiencing will give the campaign valuable information on how to better trial and adapt the rollout of a four-day week in other organisations.

“4 Day Week Global and our partners are supporting these businesses to ease their transition to a flexible work model, and using the findings to inform the process for many more businesses to trial, adapt, and reap the benefits of emphasising productivity over time – thereby transforming the world of work for all of us,” he said.

Pay transparency can help close the gender pay gap but at what cost?