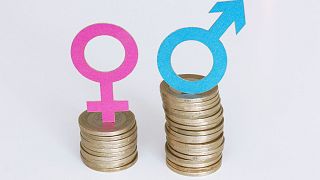 How much you earn compared to your peers has traditionally been a taboo topic that you may feel too shy to discuss with your colleagues. But normalising pay transparency is an important step to achieving gender pay parity.

Companies around the world are increasing pay transparency policies as a way to communicate pay-related information to employees. The European Union is too and has set a proposal to make pay available by gender.

Women in the EU earn on average 14 per cent less per hour than men and the bloc is currently negotiating legislation to require companies be more transparent about these gender wage disparities.

Although pay transparency sounds like a simple solution to achieving pay parity, it begs other questions such as whether it is actually effective, whether companies will level the playing field and whether it goes far enough for women’s rights.

Research has shown that pay transparency does narrow the pay gap but it is not achieved by just increasing women’s pay – rather, the growth rate of men’s pay decreases, according to a study carried out in Denmark.

“There's no way that you can both increase females' wages and men are equally happy and the firm earns more because something magic happens,” Morten Bennedsen, an economist and professor at ​​the University of Copenhagen who worked on the study, told Euronews Next.

Other research conducted in the United States found that there is “a drop in productivity” which “seems to be offset by a lower wage bill”, said Elena Simintzi, an assistant professor in finance at the University of North Carolina Kenan-Flagler Business School.

How does pay transparency benefit women?

While it may cause lower productivity in men, in her research, Simintzi found positive effects on women.

“Our research found the law was a success as it significantly reduced the gender pay gap, as it intended to do. It also had several unintended positive effects on women’s employment outcomes,” she told Euronews Next.

In those companies, Simintzi explained, not only are there higher recruitment and retention rates for women – but they also get promoted more. Employees are more likely to stay in a company and pay transparency also helps to attract new talent.

According to software and data company Payscale, if there is no wage transparency, employees – especially younger ones – are more likely to leave the company within six months.

Poor pay transparency can also seriously damage a company’s reputation, as the BBC learned in 2018 when 200 employees urged their bosses to make public all salaries and benefits.

In new research, Simintzi found that pay transparency also benefited mental health as she saw women using less antidepressant medication when pay transparency rules were applied. But she noted there was no significant change for men.

“This suggests that fairness in the firm has a deep and important effect on women’s well-being,” she said.

While many companies are in favour of pay transparency, they do worry about the cost and legal headwinds.

The lobby group representing companies in the European Union, BusinessEurope, said while it supports the objectives of improving gender equality and achieving a more equal participation of men and women in the labour markets, it is concerned that the EU’s draft directive on pay transparency is too detailed and prescriptive.

“This doesn’t really create a trustworthy working environment, but a stepping stone for costly compliance and a risk of unjustified litigation," said Maxime Cerutti, director of the social affairs department at Business Europe.

“For example, it is crucial that the exemption for companies with less than 250 employees from the reporting obligation and joint pay assessment is retained. If this exemption is not included, SMEs will have to bear heavy administrative and financial burdens, with little effect on reducing pay differences,” he told Euronews Next.

The European Parliament in April voted in favour of requiring EU companies with at least 50 employees, instead of 250 as originally proposed, to disclose information that makes it easier for colleagues to compare salaries and expose any existing gender pay gap in their organisation.

MEPs also want the European Commission to create a label to award employers who do not have a gender pay gap and to prohibit pay secrecy in work contracts.

But exactly how that would work is still being mapped out, and how managers and employers implement the rules will be crucial.

A study by Harvard Business Review found proper manager training and learning resources for employees was needed. It pointed to a lack of appropriate channels for employers to voice their feelings about transparency policies, as well as a lack of resources for them to understand the pay system.

BusinessEurope has also raised concerns that if pay transparency is enforced it could create privacy issues.

“It can be really easy, especially in smaller companies or companies where you only have one or two people performing a comparable job, to know whose wage you’re talking about, even if you’re talking about an average or median wage,” argued Cerutti, adding that the basic principles of the EU’s General Data Protection Regulation (GDPR) and confidentiality of information must be respected.

Another point, that Morten agrees with, is that it is hard to compare salaries when there are certain job categories that are typically filled by women and paid less. This is more of an “occupational bias” than a gender wage gap, Cerutti said.

He added that “it is already inappropriate to compare between companies and even more so between sectors, seeing as the situations determining pay are very different”.

But Laeticia Thissen, a gender-equality and women’s-rights policy analyst at the Foundation for European Progressive Studies think-tank, argues that wage disparities should still be looked at across industries given how the COVID-19 pandemic put the spotlight on the real value of mostly female-dominated jobs.

“The pandemic highlighted the systematic undervaluing of women's work, and I like to use the example of the bricklayer lifting stones and getting better paid than a nurse or caretaker who is lifting people,” she told Euronews Next.

“And so here it comes down very much to what it means. What do we value as a society?”

She said the pay transparency directive is “a step in the right direction” but we should also be looking, for instance, at the EU’s work-life balance directive.

Thissen says the gender pay gap is more than just the salary itself, and that advantages such as bonuses or company cars and travel abroad should also be looked at, as should the long-term effects of these disparities.

Salary can in many countries have an impact on pensions – and these can also be affected when women have children and take maternity leave.

This in turn “has the potential to empower women to access information and subsequently gives them the right to seek more clarity on pay,” she said.

“And that is also very important for women returning from maternity leave, for instance, in order to make sure that they are not disadvantaged”.