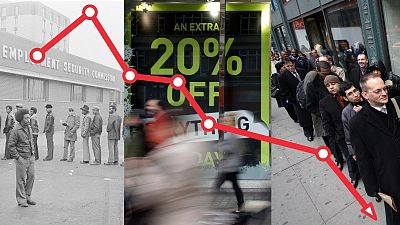 Experts are warning that a new recession could be looming for the global economy.   -   Copyright  Canva/Associated Press   -
By Aisling Ní Chúláin  •  Updated: 06/09/2022

If years of upheaval caused by the COVID-19 pandemic, escalating inflation and the war in Ukraine isn’t enough, some economists are now warning that a new global recession could be looming.

According to the International Monetary Fund (IMF), the main drivers of this pessimistic outlook are downturns in China and Russia, weak consumer spending in the US and tight financial conditions due to higher than expected inflation worldwide.

Moreover, the fallout from the Ukraine war is further complicating the economic picture and in July, the IMF downgraded their 2022 global growth forecast to 3.2 per cent, a percentage point lower than their outlook from April of this year.

Broadly speaking, a recession is defined as a severe, widespread and prolonged downturn in economic activity but a common rule of thumb is two quarters of consecutive decline in Gross Domestic Product (GDP), the measure of a region’s economic output.

By this technical definition, the US could already be said to be experiencing a recession.

But as Jan Egbert Sturm, Director of the KOF Swiss Economic Institute at the ETH Zurich points out, this technical definition is no perfect indicator either.

"Other aspects by which we define the economy, like, for instance, the labour market, were actually doing pretty well and hence do not give yet signs of a recession," he told Euronews Next.

Two US jobs reports from July and August of this year showed the country added 528,000 and 315,000 jobs respectively, indicating a still robust labour market despite pressures.

We are still getting out of the pandemic, so to speak, the crisis there. And we see that labour market numbers are still going in the right direction. But that might change, and that's what people fear.

But as this is a figure that can lag behind a fall in GDP, all eyes will be on the reports in the coming months for signs of trouble.

Moving to Europe, the big fear is for the upcoming quarters where fiscal measures to manage inflation and strangulated gas deliveries from Russia could take their toll on the economy.

"We are still getting out of the pandemic, so to speak, the crisis there. And we see that labour market numbers are still going in the right direction. But that might change, and that's what people fear".

Another component that could be driving us into a recession is the constant chatter and coverage about it potentially driving down consumer confidence.

"We're in this situation that everyone worries about what's coming, and what do we do if you worry? Well, your normal reaction is, well, let's be careful in making larger transactions," Sturm explained.

"And if we all have that attitude, 'let's wait and see' then demand, of course, is not as it is supposed to be, and we're actually in a recession. So, in that particular sense, it's self-fulfilling".