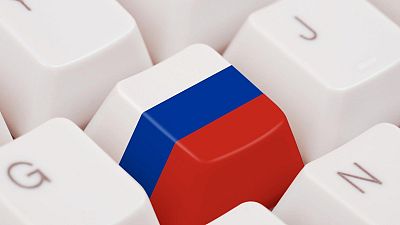 Despite being banned in the Europe Union since March 2, content from Russia Today (RT) continues to slip through the cracks of the bloc’s sanctions, spreading anti-Ukrainian misinformation.

The EU’s ban on the pro-Kremlin Russian news agency imposed less than a week after the beginning of the Russian invasion of Ukraine in February, should have blocked RT content on all means of transmission and distribution, including social media and search engines, shielding European audiences from Moscow misinformation.

And yet, over four months later researchers at the Institute for Strategic Dialogue (ISD), an independent think tank monitoring the spread of disinformation and extremism worldwide, found that articles from the pro-Kremlin news agency were still available in Europe thanks to mirror websites and Internet loopholes.

"We actually totally accidentally bumped into this. What we were actually interested in was how Ukrainian refugees are represented in Russian media and in the Russian info space," explained Kata Balint, one of the ISD analysts who worked on the study.

"We started out looking at RT and how its reporting on Ukrainian refugees has been over the past couple of months, and since we didn't use the VPN at the time, we weren't able to access RT articles directly - but we still found some of them in our Google search results," Balint told Euronews Next.

Over the past months, these articles amassed millions of views.

Researchers found that there were different ways RT articles could reach European audiences despite EU sanctions.

"We found domains that were created after the start of the ban, after the implementation of the ban on March 2," said Balint, adding that these websites could easily be attributed to RT servers and often looked exactly the same as the Russian news agency’s page.

"Content-wise, it's completely the same," she continued. "But these sites because in their domain names it doesn't say RT.com, but it says something different - something very similar but still different - because of this, these domains aren't sanctioned, so they can still be accessed by European audiences".

Besides variations of the RT domain names and mirror websites identical to RT official sites, the ISD team also found websites that copy-pasted articles from RT and others that simply re-directed traffic to RT - and these are harder to spot.

"These are the sort of websites that copy-paste from all sorts of different types of sources, including RT," said Balint.

"These websites, however, can not be attributed to RT. They are probably doing this just for financial gains. It's a bit difficult to understand the motivations behind them. But these sites are also problematic because they should be sanctioned if they distribute RT content".

What propaganda were these articles sharing?

“We found a couple of different narratives that were most present,” she explained, specifying that the ISD study was focused on the way RT talked about Ukrainian refugees, and not necessarily other aspects of the war.

“One of the ones that you've probably come across yourself as well - it's been quite a loud narrative - is around the preferential treatment of Ukrainian refugees compared to other refugees, which has been really strong in the first couple of weeks of the war”.

Other articles focused on the cost Ukrainian refugees are going to have for the countries hosting them, “the financial burden of it,” said Balint.

“But then we also saw some articles around the ‘physical threat’ that Ukrainian refugees pose to host countries”.

Researchers worry that this kind of narrative might undermine support for Ukrainian refugees over time, especially as the war continues.

What is the EU doing about it?

Before publishing the study on July 20, Balint and her colleagues sent their findings to the European Commission.

"They are aware of the problem," said Balint.

Questioned about the issue by Politico, European Commission's Vice President for Values and Transparency Věra Jourová said that "sanctions apply in full and it is for economic operators to apply them and national authorities to enforce this".

In our research, we also flagged that on Twitter, if you manually change your location to, let's say, somewhere outside of the EU, I'm still able to access RT content. And that seems to have changed.

Euronews Next has contacted the European Commission, as well as Twitter and Meta, for comment but none replied at the time of publication.

The study by the ISD has already helped crack down on the spread of pro-Kremlin propaganda, Balint says.

“What's quite interesting about this is that it was extremely easy to find these different domains only through a Google search,” said Balint, adding that in response to the ISD study, Google said they delisted the websites that the ISD researchers found.

"So in that sense, we did sort of get something out of it in that way," she said.

"In our research, we also flagged that on Twitter, if you manually change your location to, let's say, somewhere outside of the EU, I'm still able to access RT content. And that seems to have changed," Balint.

"We just checked it earlier this week, if it was still possible, and even when I do change my location manually on Twitter, I still can not see the pages anymore".

"So it seems that something has been done after the publication of this research".

The ISD is expected to publish a new study soon looking further into how these websites reproducing RT content work, specifically looking at the traffic data of European audiences.

"Hopefully that will give them more sort of a bigger, broader overview of all of this," Balint said.