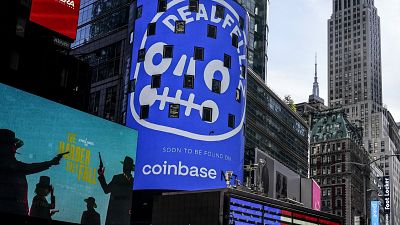 Coinbase's shares have dropped on Wednesday for the second day in a row after a SEC probe into the company was announced on Monday.   -   Copyright  Seth Wenig/AP
By Giulia Carbonaro  & Reuters  •  Updated: 27/07/2022

Shares for Coinbase, the US biggest cryptocurrency exchange, dropped by a staggering 21 per cent on Wednesday as the company is reportedly facing an investigation into whether it improperly let Americans trade digital assets that should have been registered as securities.

Bloomberg originally reported the story and o wrote on Monday that three people familiar with the matter spoke about an investigation into Coinbase’s practices by the US Security and Exchange Commission (SEC).

The SEC has not yet confirmed the existence - “or nonexistence” - of the investigation.

Coinbase said it is confident about its due diligence. The company’s chief legal officer told reporters on Tuesday that it did not list any securities on its platform. But this confidence is hardly enough to reassure investors already shaken by another SEC investigation into the company, which this week saw a former manager and two other people (one of whom the manager’s brother) sued for an alleged insider trading scheme.

Shares for Coinbase were falling even before Bloomberg broke the news of the unconfirmed SEC investigation and were down by 14 per cent on Tuesday and 21.8 per cent on Monday. Coinbase’s shares are 77 per cent down compared to last year

While part of the reason for the company’s performance could be attributed to the volatility of the crypto market, it is hard to deny its troubles with the SEC are now starting to have an impact on the company’s results.

A Coinbase spokesperson told Reuters the company does not list securities on its platform, while the regulator declined to comment on the report.

The company’s legal head Paul Grewal said Coinbase will engage with the SEC on the matter.

“We are confident that our rigorous diligence process — a process the SEC has already reviewed — keeps securities off our platform,” Grewal said.