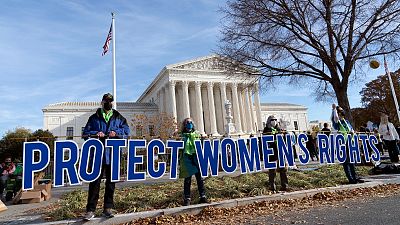 Some of the largest companies in the United States have reaffirmed their commitment to help workers access out-of-state healthcare services after the Supreme Court overturned Roe v Wade.

Friday’s landmark decision ends the constitutional right to an abortion in the US. Numerous states are now expected to restrict or ban abortion, leaving many fearful and anxious about their ability to access reproductive services.

Many companies had already moved to protect employees’ access to abortion following the leaking of the draft ruling in May, and after Friday’s announcement other organisations have followed suit.

Here’s what some companies have said they’ll offer:

The company's benefits will cover the cost of employees who need to travel to another location to access care, including to obtain an abortion.

"Please know that our company remains committed to removing barriers and providing comprehensive access to quality and affordable care for all of our employees, cast members and their families, including family planning and reproductive care, no matter where they live," the company said in an internal memo seen by broadcaster CNBC.

Facebook owner Meta also said on Friday it will reimburse travel expenses for employees seeking out-of-state reproductive care. However the company is also "assessing how best to do so given the legal complexities involved," according to a spokesperson.

Despite this, Meta has also moved to limit internal discussion of the ruling.

Moderators on its Workplace forum removed posts mentioning abortion, citing a "respectful communications" policy barring employee discussions of political topics, according to a LinkedIn post by a Meta employee in Seattle.

Google sent a company-wide email on Friday following the news saying that employees in affected states could apply for relocation “without justification”.

"Googlers can also apply for relocation without justification, and those overseeing this process will be aware of the situation," CNBC reported the email as saying.

Google also said that its benefits plan covers out-of-state medical procedures that are not available where an employee lives and works.

Ride hailing company Lyft said it would legally shield drivers in abortion cases, saying it would expand a recent policy as new state laws were passed.

"No driver should have to ask a rider where they are going and why," a spokesperson said.

Apple has confirmed that its benefits allow employees to travel out of state for medical care if it is not available where they live.

"As we’ve said before, we support our employees’ rights to make their own decisions regarding their reproductive health. For more than a decade, Apple’s comprehensive benefits have allowed our employees to travel out-of-state for medical care if it is unavailable in their home state," an Apple spokesperson told CNBC.

Microsoft in May said that it would extend its abortion and gender affirming care services for employees in the US to include travel expense assistance.

Following Friday’s ruling by the Supreme Court, a Microsoft spokesperson told The Seattle Times that "Microsoft will continue to do everything we can under the law to support our employees and their enrolled dependents in accessing critical health care".

Amazon told its staff in May that it would cover up to $4,000 (€3,782) in travel expenses for medical treatments, including abortions.

The company will pay the travel costs for staff who are forced to travel 100 miles (161km) or more to have the procedure.

Online travel review site Yelp previously said in May that it would cover the cost of travel for employees seeking reproductive services.

On Friday, the company’s co-founder and chief executive Jeremy Stoppelman said the Supreme Court ruling "puts women's health in jeopardy, denies them their human rights, and threatens to dismantle the progress we've made toward gender equality in the workplace since Roe".

Starbucks said on Friday that it would reimburse abortion travel expenses for partners enrolled in its healthcare plan if a legal provider isn’t in the partner’s state of residence or within 100 miles of their home, The Seattle Times reported.

Earlier this month, Starbucks had said all partners who are enrolled in their healthcare plan would have access to the benefits, including those who are unionising, the newspaper reported.

But the company added that it could not "make promises of guarantees about any benefits" for unionised stores.