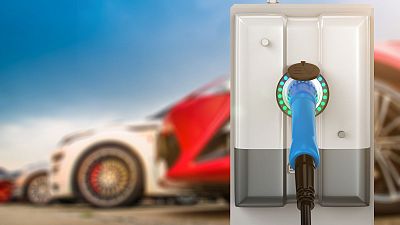 As Europeans gear up for their summer holidays, some are getting ready to put their new electric vehicle to the test of range anxiety.   -   Copyright  Canva
By Natalie Huet  •  Updated: 20/06/2022

As oil prices soar and governments crack down on combustion engines to curb global warming, more and more drivers are considering switching to an electric vehicle (EV).

For the first time ever, more than half of car buyers surveyed worldwide want their next purchase to be an electric or hybrid model, according to Ernst & Young’s latest Mobility Consumer Index.

For many living in the European Union, going electric could even become an obligation quite soon, as the EU moves closer to banning sales of new petrol or diesel cars from 2035.

But for now, as the summer holidays approach, new and prospective owners may still be nervous when it comes to taking long trips in an EV, with a nagging fear they might run out of power before reaching a charging station.

According to the Electric Vehicle Database, the average battery range of EVs currently sits at a comfortable 326 km, enough to allay so-called range anxiety when it comes to everyday use.

But a cross-border European road trip would require topping up along the way, and the infrastructure across the continent remains patchy in many areas.

Not only are charging stations very unevenly distributed, but the providers and payment systems differ too.

Here are three things you need to know about Europe’s EV charging landscape.

The EU has more than 330,000 publicly accessible charging points, and that number is growing, but their uneven deployment means “travel across the EU in electric vehicles is not easy,” the European Court of Auditors warned in a report last year.

Just three countries – Germany, France and the Netherlands – account for 69 per cent of all charging points across the EU, while 10 European countries do not have a single charger per 100 km of road.

The European Commission has a target of hitting 1 million charging points by 2025, but the ECA’s report warned that the target risked being missed “if deployment continues to follow current trends”.

There are disparities within countries, too, with cities much better covered than rural areas.

This is especially the case in Eastern Europe.

Half of Slovakia’s EVs, for instance, are registered in the capital Bratislava, a city also home to a third of the country’s charging points, said Aaron Fishbone, Director of Public Policy at GreenWay, which sells and operates chargers in Slovakia and Poland.

Adding to the confusion, there are dozens of charging station operators across Europe, alongside Tesla’s proprietary network, which is only just starting to open up to non-Tesla vehicles.

Many charging operators work with subscriptions, but non-members can pay “roaming” fees to use other networks.

2. There are apps and maps to navigate the jungle of charging stations

Fortunately, there are dedicated apps that help drivers navigate this jungle and map their journey, such as PlugShare and Chargemap.

Chargemap’s CEO likens the service to a “TripAdvisor of charging stations,” where users can rate the charging points and flag those in need of maintenance.

With a card costing just under €20 a month, Chargemap users can access more than 600 operators (including Ionity, Fastned, EVBox Allego and New Motion) and some 230,000 charging points across Europe.

If you’re going on vacation to Spain or Portugal, it’s going to be somewhat tricky

These charging operators all have different rates, but the single badge makes it easier to track the invoices incurred by each top-up, and you don’t need to juggle between subscriptions.

It can also help companies control the costs incurred by their electric fleets. Chargemap already has some 400 business clients that use its badges like company fuel cards.

Chargemap is well placed to describe just how uneven Europe’s charging infrastructure is.

“So if you’re going on vacation to Spain or Portugal, it’s going to be somewhat tricky,” he said, advising EV drivers to prepare their trip carefully.

There’s reason to be optimistic, though. The market is starting to consolidate, and as more EVs hit the roads, more charging stations are popping up, and investment in infrastructure is recouped more quickly.

One in 11 new cars sold in the EU in 2021 was fully electric, a jump of 63 per cent compared to 2020, according to data from the European Automobile Manufacturers Association (ACEA).

Meanwhile, according to ChargeUp Europe, the number of publicly accessible charging points alone has risen sixfold since 2015. Those are the chargers found on motorways, car parks or at supermarkets and shopping centres.

Those public stations actually only account for about 15 per cent of the overall number of charging points in the EU.

The vast majority of EV charging occurs in private residential or commercial buildings, and that’s where ChargeUp Europe sees the most opportunity for growth.

Because electricity is so ubiquitous across the EU, the EV charging industry would like to see regulatory barriers taken down so that charging points can be set up much more easily in more places, including in older European neighbourhoods with strict urban planning rules and fire codes.

Topping up more often anywhere, he added, would help “balance out” the economics of EV charging, as it’s generally cheaper to recharge an EV overnight at home or during the day at the office than at public ultra-fast charging stations.

It should be like recharging your phone or your laptop. You plug in a little bit wherever you are

The “right mix,” he suggested, would be to recharge 75 per cent of the time at low price, low-power charging points, and the remaining 25 per cent on the go, at the more powerful and fast chargers.

Looking ahead, smart charging will help owners find out when is the best time to tap the grid to recharge their car – and some vehicles are already able to re-inject power to the grid.

For now, industry players disagree with the notion that charging an EV should be as simple as refuelling a car.

“We push back on that metaphor because it's the old paradigm,” said Fishbone.

“No, it should be like recharging your phone or your laptop. It's topping up. You plug in a little bit wherever you are”.