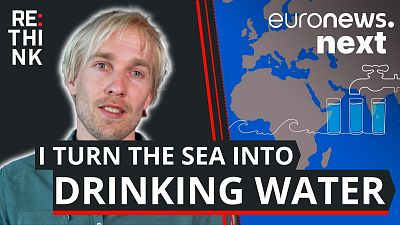 Have you ever woken up in the middle of the night with the urge to drink a glass of water?

If you quench your thirst by a simple trip to the kitchen to pour yourself a glass of tap water, then you are one of the lucky ones.

Almost 2 billion people worldwide do not have easy access to drinking water, according to the World Health Organization (WHO). And half of the world’s population could be living in areas facing water scarcity by 2025, according to UNICEF.

The vast majority of water on our planet is salt water, which is unsuitable for direct consumption.

With this in mind, one of the solutions to improve access to drinking water is to use this salt water and make it drinkable through a process called desalination.

Desalination - removing the salt from water - is not a recent process. It was discovered in 1850 and started being applied to seawater around 1960.

One of the major drawbacks of this method is its high energy consumption, which has a significant impact on climate change.

Sid Vollebregt, CEO at Elemental Water Makers, proposes a solution to this challenge.

The company uses a technique called reverse osmosis which he explains works a bit like a sieve: The salt water runs at high pressure through a membrane that filters out not only the salt, but also viruses and bacteria, resulting in very clean water on the other side.

A lot of high-pressure water is typically lost in this process, but Elemental Water Makers reuses it to power the whole system, along with solar energy.

Solar energy is only sufficient for small projects, but Vollebregt explains that wind energy and even wave energy could also be used for larger projects.

The downsides of desalination

Apart from the high energy consumption of desalination, another major problem is the salty residue left behind in this process, the brine.

This water, which is extremely high in salt, other minerals and potentially chemicals too, is disposed of in the environment. This affects the water in the area and has an impact on marine life and other ecosystems.

The solution put forward by Elemental Water Makers is to extract only a small part of fresh water from a given volume of salt water.

This results in less salty brine, which will have a lower impact on marine life when returned to the ocean. The company also says it doesn’t use any chemicals.

Water scarcity is a societal, not technological problem

For Vollebregt, there are currently plenty of solutions to combat water scarcity.

Some of the solutions consist of using less water on a daily basis, recycling water and finding uses for wastewater.

Other solutions include capturing water from the air or from the sea, and there are even technologies that extract potable water from human faeces.

If the world’s problem with water scarcity isn’t due to a lack of technological know-how, then where does it come from?

“It's really a question of valuing water,” said Vollebregt, calling for policy change to start making consumers and companies pay for the water used to grow food in water-scarce regions.

“Coffee beans that come from India, Chennai, or avocados that come from Chile, which are both very water-scarce regions, export these foods while the population has no access to clean water themselves,” he said

“This is about valuing water, and I think that's the biggest step that we have to take as a society”.

How harvesting fog to make water is tackling droughts in Morocco