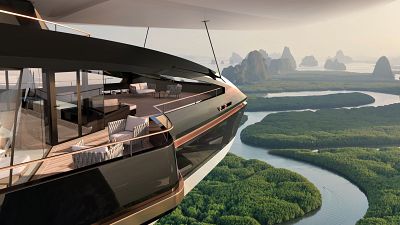 A concept image of the AirYacht, a new concept proposing to fly yachts through the skies using airships   -   Copyright  AIrYacht
By Aisling Ní Chúláin  •  Updated: 12/05/2022

Admittedly it’s a niche problem. You’ve spent the last two weeks lounging on a yacht on the French Riviera and have reached the point where the sun and the waves have begun to lose their charms.

It occurs to you that missing from this idyll is the chance to hook your ship to a massive helium-filled blimp and take a pleasure cruise through the skies.

Well, we said niche, after all.

But If you do belong to this rarefied group, a Swiss company AirYacht, co-founded by Guillaume Hoddé and Mathieu Ozanne, is trying to make this ambitious dream a reality.

“What is an AirYacht? If you see what is a Yacht, a 60 metre yacht like you see on the sea? The AirYacht, it is the same kind of device, as big as a 60-metre Yacht, but it flies,” Ozanne told Euronews next.

It was a mutual love of flying that inspired Ozanne and Hoddé to try and get the concept off the ground in 2017.

It also offered them a chance to combine their experience in engineering and the luxury goods market respectively as well as capitalise on advancements in cargo-airship innovation for carrying heavy loads.

The basic idea is that an airship - much like the famous Zeppelin airship that crossed the Atlantic for the first time in 1928 - that can be attached and detached from a luxury yacht-like residence using cables.

The airship by design doesn’t require energy to keep aloft. This is achieved by filling it with helium, but in order to navigate or change direction, it requires some sort of propulsion method.

For now, Ozanne says their concept, which has yet to generate a functional prototype, will use hybrid power initially, with the goal of eventually switching to electric or hydrogen-powered when fuel cell technology permits it.

“The airship is hybrid. There is a generator to create electricity but all the propellers are with an electric motor,” he explained.

“The big advantage of that is that as soon as the technology of fuel cells, hydrogen and so on will be available, you can quickly switch to a CO2-free propulsion and we hope to make that move in ten years,” Ozanne added.

The plan is for professional pilots to fly the proposed 200-metres long aircraft.

For the time being, the founders have defined the design and are looking for funders in order to continue the engineering process and realise a prototype.