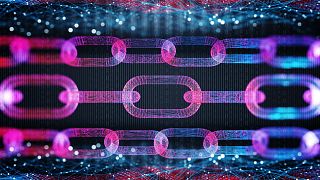 All the profits of Morpher Arena will also be donated to organisations supporting Ukrainian refugees.   -   Copyright  Canva   -
By Pascale Davies  •  Updated: 06/05/2022

Cryptocurrencies and blockchain technology have proven to be a lifeline to save both the Ukrainian and Russian economies.

But crypto donations are not the only way blockchain technology is helping those affected by the war.

The American and Austrian start-up Morpher launched a platform on Friday that allows investors to bet against Russian stocks, without benefiting the Russian government, companies or oligarchs.

All the profits of Morpher Arena will also be donated to organisations supporting Ukrainian refugees.

The company has both Ukrainian and Russian nationals among its team but Morpher’s founders say they want to raise funds to support the Ukrainian people.

“What used to be a free and open market on the Moscow Stock Exchange was all of a sudden a very restricted and sanctioned market. So a lot of people have lost access, and that is exactly what the Morpher protocol is built for,” the company’s CEO Martin Froehler told Euronews Next.

He said it works through a peer-to-peer cryptocurrency smart contract on the Polygon blockchain.

Users deposit USD Coin - a digital stablecoin that is pegged to the dollar - into the platform and, in return, own a part of the total staking pool.

People from all over the world can then place bets on the price development of the stocks in companies like Russia’s gas giant Gazprom. The underlying stock of the company is never traded, so Gazprom - or whichever company it is in question - would not benefit.

“It’s really just people who are interested or who have an opinion about what the price of gas is going to do next. They bet in a zero-sum game against everyone else and whoever makes the better prediction ends up winning,” said Froehler.

“Anyone who has access to a smart contract platform can use it so this is really democratic and egalitarian in that way”.

The company says is also creating awareness of the suffering of many Russians who have lost their life’s savings due to recent economic sanctions imposed on the country.

“Gold has been confiscated, stocks can be confiscated, even the Russian central bank now has to learn that half of the foreign currency reserves they actually don't own because they were just taken away”.

Not without its risks

It must be noted that cryptos are not free from risk and prices can be highly volatile.

On Friday, Bitcoin dropped as much as 11 per cent, Ether slumped 9 per cent and other altcoins followed them into the red.

However, blockchain technology could help those in conflict regions, where markets may not be accessible.

“We're entering into a new era of protectionism. People are actually losing rights and we believe that markets should be open to everyone regardless of their country of birth or residence because effectively participation in capital markets is the only way to build up or preserve wealth,” said Froehler.

“I believe if we take that away also from Russians, for that matter, it will be impossible for them to change their destiny and get a better government and if we defund them systematically from them in the West, then they will have no means to shape their destiny in the future”.