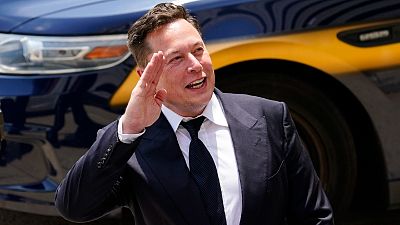 Elon Musk will join Twitter's board of directors, company CEO Parag Agrawal announced in a tweet on Tuesday.

"He’s both a passionate believer and intense critic of the service which is exactly what we need on Twitter, and in the boardroom, to make us stronger in the long-term," Agrawal said.

On Monday, filings revealed that the Tesla and SpaceX CEO had bought a 9.2 per cent stake in Twitter, worth nearly $3 billion (€2.7 billion).

The purchase makes him Twitter's largest shareholder and sent shares soaring by more than 27 per cent after it was made public.

Hours after his shareholding in Twitter was made public on Monday, Musk posted a poll asking users of the micro-blogging platform if they wanted an edit button.

"Do you want an edit button?" Musk asked in a tweet later in the day.

By Tuesday morning, more than 2.2 million users had voted, with close to 75 per cent of them backing an edit option.

Replying to Musk's poll, Twitter CEO Agrawal tweeted that the consequences of the poll will be important. "Please vote carefully," he said.

On April 1, Twitter had tweeted a message on its official account saying it was working on the long-awaited "edit" feature.

When asked if the tweet was an April Fool's joke, the company had then said: "We cannot confirm or deny but we may edit our statement later".

Musk's move, revealed in a regulatory filing, comes on the heels of his tweet that he was giving "serious thought" to building a new social media platform, while questioning Twitter's commitment to free speech.

Last week, in another poll, Musk had asked if Twitter's algorithm should be open source.

More than 82 per cent of the users said yes, while former CEO Jack Dorsey said, "the choice of which algorithm to use (or not) should be open to everyone."

A prolific Twitter user, Musk has more than 80 million followers since he joined the site in 2009 and he has used the platform to make several announcements, including teasing a go-private deal for Tesla that landed him in hot water with regulators.

Of late, however, the world's richest person has been critical of the social media platform and its policies, and recently ran a Twitter poll asking users if they believed the platform adheres to the principle of free speech, to which over 70 per cent voted "no".

In December, Musk put out a meme that compared CEO Agrawal with Soviet dictator Joseph Stalin and showed Jack Dorsey as a close associate who was later on executed.

Twitter's latest quarterly results and lower-than-expected user additions have raised doubts about its growth prospects, even as it pursues big projects such as audio chat rooms and newsletters to end long-running stagnation.

"It does send a message to Twitter ... having a meaningful stake in the company will keep them on their toes, because that passive stake could very quickly become an active stake," said Thomas Hayes, managing member at Great Hill Capital LLC.

Musk - who, according to Forbes, has a net worth of about $300 billion (€273 billion) - has been reducing his stake in Tesla since November, when he said he would offload 10 per cent of his holding in the electric-car maker. He has already sold $16.4 billion (€15 billion) worth of shares since then.

A regulatory filing on Monday showed that Musk now owns 73.5 million Twitter shares, which are held by the Elon Musk Revocable Trust, of which he is the sole trustee. Vanguard is Twitter's second-biggest shareholder, with an 8.79 per cent stake, according to Refinitiv data.

"Musk's actual investment is a very small percentage of his wealth and an all-out buyout should not be ruled out," CFRA Research analyst Angelo Zino wrote in a client note.

The stake in Twitter is more likely to result in positive outcomes for shareholders than negative ones, said Ryan Jacob, chief executive officer of Jacob Asset Management, who said Twitter is one of the fund's largest holdings.

Musk has previously made early-stage investments in companies, including online payment processor Stripe Inc and artificial intelligence firm Vicarious. He is also the founder and chief executive officer of SpaceX, and leads brain-chip startup Neuralink and infrastructure firm the Boring Company.

Twitter was the target of activist investor Elliott Management Corp in 2020, when the hedge fund argued the social networking company's then-boss and co-founder, Jack Dorsey, was paying too little attention to Twitter while also running what was then called Square Inc.

Dorsey, who owns a stake of more than 2 per cent in Twitter, stepped down as CEO and chairman in November last year, handing the reins to company veteran Parag Agrawal.

Meanwhile, Musk and Dorsey have found some common ground in dismissing the so-called Web3, a vague term for a utopian version of the internet that is decentralised.

The UK is minting its own NFT