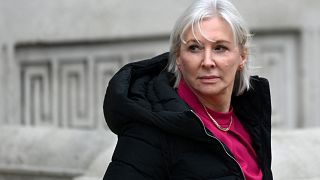 Culture secretary Nadine Dorries was already thought to be the driving force behind plans to shake up the digital news landscape   -   Copyright  Daniel LEAL / AFP
By Tom Bateman  •  Updated: 21/02/2022

The United Kingdom could introduce a law forcing tech companies like Meta and Google to pay media outlets for featuring their stories in content feeds or search results.

The country's culture minister Nadine Dorries told the Sunday Times newspaper that she was looking at implementing a similar system to the one introduced in Australia last year, calling her plans "Australia plus plus" and "Australia with bolts on".

In January, Britain's Mail on Sunday newspaper reported that the UK culture secretary was behind planned legal changes that would push tech platforms to negotiate fees with news publishers, and could see an independent regulator set prices if no agreement could be reached.

Dorries, who was previously the UK's mental health minister, said regulating Big Tech would help Britain's media organisations survive in an era where most consumers have grown used to getting their news for free online.

"I saw the pervasiveness of Big Tech when I was in health, and I see what it’s doing to our democracy and our press from this department," she told the Sunday Times.

Companies like Facebook and Google have long been criticised by publishers for taking advantage of their content for free, profiting off the attention it brings to their own platforms.

In February last year, Facebook pushed back at Australia's then-proposed law, saying publishers "willingly choose to post news on Facebook," as it helped grow their audiences.

Tech firms Meta (then still called Facebook) and Google fought against the law, with Facebook opting to block its Australian users from sharing or viewing news stories on its platform.

Regulation of tech platforms in the UK would also follow a European trend.

This week, Meta released Facebook News, a content aggregation service that republishes stories on the company's platform, to its users in France, in a move likely to be repeated across the European Union.

The new law superseded a Spanish regulation, adopted in 2014, that obliged Google and other news aggregators to pay a central licence fee to Spanish news organisations for re-using their stories.