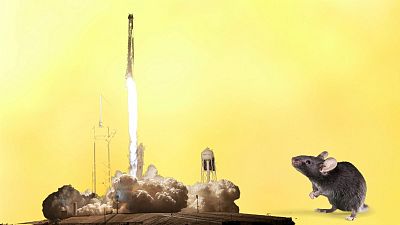 Scientists in the United States have developed a new form of drug that promotes the regeneration of cells and reversed paralysis in mice with spinal injuries, allowing them to walk again within four weeks of treatment.

The research was published in the journal Science on Thursday, and the team of Northwestern University scientists behind it hope to approach the Food and Drug Administration in the US as early as next year to propose human trials.

"The aim of our research was to develop a translatable therapy that could be brought to the clinic to prevent individuals from becoming paralysed after major trauma or disease," Northwestern's Samuel Stupp, who led the study, told AFP.

Stupp's team, on the other hand, used nanofibres to mimic the architecture of the "extracellular matrix" - a naturally occurring network of molecules surrounding tissue that is responsible for supporting cells.

Each fibre is about 10,000 times narrower than a human hair, and they are made up of hundreds of thousands of bioactive molecules called peptides that transmit signals to promote nerve regeneration.

The therapy was injected as a gel into tissue surrounding the spinal cords of lab mice 24 hours after an incision was made in their spines.

The team decided to wait a day because humans who receive devastating spinal injuries from car accidents, gunshots and so on also experience delays in getting treatment.

Four weeks later, the mice who received the treatment regained their ability to walk almost as well as before the injury. Those left untreated did not.

The mice were then put down to examine the impacts of the therapy on a cellular level, and the team found dramatic improvements to the spinal cords.

A key discovery by the team was that creating a certain mutation in the molecules intensified their collective motion and heightened their efficacy.

This is because receptors in neurons are naturally in constant motion, Stupp explained, and increasing the motion of the therapeutic molecules within the nanofibres helps connect them more effectively with their moving targets.

The researchers in fact tested two versions of the treatment -- one with the mutation and one without -- and found that mice that received the modified version regained more function.

The gel developed by the scientists is the first of its kind, but could usher in a new generation of medicines known as "supramolecular drugs," because the therapy is an assembly of many molecules rather than a single molecule, said Stupp.

According to the team, it is safe because the materials biodegrade within a matter of weeks and become nutrients for cells.

Stupp said he hopes to rapidly move directly to human studies next without the need for further animal testing, such as on primates.

This is because the nervous system is highly similar across mammal species and "there is nothing out there to help spinal cord injury patients, and this is a huge human problem," he said.

Britain's Prince Harry has sharply attacked the failure of social media companies to challenge hate online, saying that he warned the chief executive of Twitter ahead of the January 6 Capitol riots in the United States that the social media platform was being used to stage political unrest.

Harry made the comments during an online panel on misinformation in California on Tuesday. He said he made his concerns known via email to Twitter CEO Jack Dorsey the day before the riot in Washington.

“Jack and I were emailing each other prior to January 6 where I warned him that his platform was allowing a coup to be staged,” Harry recalled at the RE:WIRED tech forum. “That email was sent the day before and then it happened and I haven’t heard from him since”.

Social media has come under fire for not doing enough to halt the spread of misinformation and content inciting political violence. The storming of the US Capitol by supporters of Donald Trump is often cited as an example of the consequences of allowing online hate to fester.

The role of social media platforms in amplifying extremist views has come into the spotlight following revelations by Facebook whistleblower Frances Haugen, who told lawmakers in the US and Europe that the company’s algorithmic systems spread online hate and that it has no incentive to change its behaviour because the company puts profits over safety.

Harry also targeted YouTube, saying many videos spreading COVID-19 misinformation were left up despite violating the site’s own policies.

“And worse, they came to the users via the recommendation tool within YouTube’s own algorithm versus anything that the user was actually searching for,'' he said.

“It shows really that it can be stopped but also they didn’t want to stop it because it affects their bottom line".

Harry also cited a report which concluded that more than 70 per cent of the hate speech directed at his wife, Meghan, the Duchess of Sussex, could be traced to fewer than 50 accounts. He said misinformation is causing lives to be ruined.

“A small group of accounts are allowed to create a huge amount of chaos online, and destruction...And without any consequence whatsoever,” he said.

The flight from NASA’s Kennedy Space Center to the glittering outpost took 22 hours. The quartet will stay there for the next six months.

The German and three US astronauts said it was an emotional moment when they first spotted the space station 30 km away.

The station’s welcome committee consisted of three astronauts instead of the originally planned seven. That’s because SpaceX returned four of the station residents on Monday after the new arrivals' launch kept getting delayed.

4 astronauts have returned to Earth, riding home with SpaceX 🚀

🎥Have a look at the moment they splashed down below 👇 pic.twitter.com/qr89WVFf5k

“I can’t tell you how happy I am to see these smiling faces,” NASA astronaut Mark Vande Hei said after embracing each of the newcomers.

“Every one of us, all seven of us, are friends, and we're going to become even better friends as time goes on.”

Vande Hei and one of the two Russians on board are midway through a one-year mission that ends in March.

While Chari, Marshburn, Maurer and NASA astronaut Kayla Barron were adapting to weightlessness — all but Marshburn are space rookies — the previous crew was adjusting to life back on Earth.

“Gravity sucks, but getting used to it slowly,” Japanese astronaut Akihoki Hoshide tweeted.