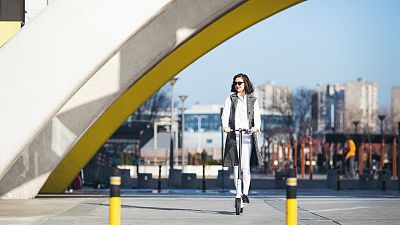 Electric scooters have disrupted micromobility worldwide, causing injuries and a fair load of resentment among pedestrians.

Operators are now hoping that smart cameras, sensors and artificial intelligence can make their devices more streetwise and more helpful to cities by flagging potholes, dangerous roads and other shortcomings in urban design.

Swedish company Voi Technology and Irish startup Luna Systems have begun integrating computer vision technology so scooters know whether they’re riding on a footpath, a cycle lane or a street. Further down the line, this information could prompt riders to change their behaviour, get off sidewalks and park in the right areas.

After testing it among employees, Voi introduced the technology for public use in the English city of Northampton this summer, and is now gradually rolling it out across other European cities, including Brussels from September 8.

"With computer vision, e-scooters can be trained to see and recognise situations that are hazardous. This world-first pilot will set new standards of safety for this new form of transport," Voi CEO Fredrik Hjelm said in a statement, adding that the move would benefit riders, pedestrians and authorities alike.

Is it a kind of three strikes and you're out scenario? Is it a sort of audio alarm? It's all up for grabs.

Injuries caused by shared e-scooters have become such a concern that some countries including France and Spain have banned them from sidewalks and pedestrian walkways. In June, Paris threatened to banish them altogether after a young woman was knocked down and killed by one.

In Finland, trauma doctors called for a ban earlier this summer after a rising in emergency room admissions was linked to e-scooter injuries. As of September, there are now overnight speed limits in place.

A survey of more than 100 riders at an emergency room in Washington DC, showed that nearly three in five were hurt while riding on a sidewalk, including in places where it was prohibited.

The newly-fitted cameras on Voi e-scooters are trained to recognise whether a device is on a footpath, a bike lane, or a busy road and whether it is parked correctly.

The data collected will be fed to an artificial intelligence algorithm that in turn will help scooters learn how to interpret their environment. That will eventually allow them to be programmed to react in a certain way.

For the rider, not much will change – for the time being. It will be up to Voi to decide, in cooperation with local authorities, which mechanisms could nudge riders to adapt their behaviour.

As things stand, an alarm will start beeping to invite the user to get off a prohibited sidewalk. Another option could be that the operator remotely slows down the device, or that repeat offenders face penalties.

"Is it a kind of three strikes and you're out scenario? Is it a sort of audio alarm? (...) It's all up for grabs," Ronan Furlong, co-founder, and chief business development officer at Luna Systems, told Euronews Next.

The hope is that all the data and add-on tech will help riders and pedestrians co-exist more peacefully.

Luna CEO Andrew Fleury argues that scooter riders typically don't go on sidewalks for the sake of it – they often end up on them because they don't feel safe riding on a road. Therefore, data highlighting the "hotspots" where this keeps happening in a city could inform local authorities of the need to create safer bike and scooter lanes there.

"It's good for cyclists, good for pedestrians. It's really a win-win for everyone," Fleury said.

Luna is also hoping that the rise of smart e-scooters can provide municipalities with vital information about the infrastructure and day-to-day management of their cities.

"We've had conversations with cities where they're talking about everything from: 'can we identify illegal littering' to 'can we put together a log of vacant properties, for example, for tax assessment purposes?'' said Furlong.

"Once we start talking to cities about this, they really start to see what the possibilities look like".

How much does this technology cost?

Voi and Luna won’t say. The companies prefer to pitch it as a worthwhile investment that can turn e-scooters into a more trustworthy and popular transportation mode.

What is also unclear is the environmental cost of devices packed with technology, especially if destroyed or abandoned by riders. Voi insists that vandalism is becoming less of a problem over time and that their products now have a lifespan of up to five years.

"The whole purpose of the industry, on one level, is to create that modal shift and get people out of their cars," said Furlong.

"So if the hurdle to achieve that is highly intelligent scooters, (...) then that's the way to go green".

E-scooter firms have been continuously striving to create smarter products, largely under pressure from local authorities.

Geofencing and slow-speed zones already cause devices to automatically slow down in dense areas, such as outside shopping centres, pubs, restaurants and schools.

Dedicated parking spots, no-park zones and penalties for users that break the rules have similarly made a difference in clearing up the sidewalks of several European cities.

It also launched a sobriety test on its app for users trying to unlock an e-scooter late at night. Riders are still able to unlock the scooter regardless of whether or not they pass the test, but the company is hoping the test will get some of them to think twice before riding under the influence.

It's not an anecdotal problem. Figures from Oslo University Hospital's accident and emergency department show that so far this year, half of those injured in e-scooter accidents had been drinking alcohol.

If scooters are becoming increasingly smart, how close are we then to self-driving models? It may sound unsettling to imagine a driverless scooter sneaking up on you, but if the devices could ride themselves back to a charging station or a dedicated parking spot, that could prevent them from cluttering pavements.

Voi and Luna wouldn't disclose whether they too are considering venturing into driverless models, but said the technology was likely to develop much faster in e-scooters than in cars.

"If you think about it from a human perspective, it's much more agreeable to potentially have an autonomous, lightweight electric scooter than it is to have an autonomous one-and-a-half-ton SUV driving around a city," said Furlong.

"I definitely think it's coming," he added. "Watch this space".