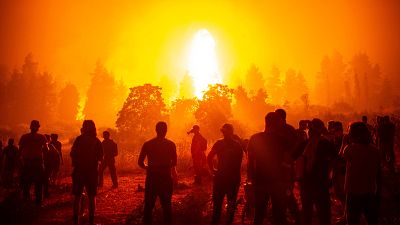 Released on Monday, it found "unequivocal" evidence that human activity has heated up the planet, concluding that anthropogenic climate change is a "statement of fact".

The report on the state of our climate - the largest ever carried out - also argued that the critical 1.5C temperature rise threshold set out in the Paris Climate Agreement was likely to be breached some time between 2032 and 2050, based on current emissions trends.

If – or when – that so-called "overshoot" happens, a set of techniques and technologies for removing carbon dioxide from the atmosphere and storing it, shortened to Carbon Dioxide Removal or CDR, will be needed to bring global temperatures back down.

"[CDR] has the potential to remove CO2 from the atmosphere and durably store it in reservoirs," the report said.

The problem is CDR methods can be both difficult to put into practice and highly controversial. Here's why.

Carbon dioxide removal: Why do it?

Before we start talking about what it takes to remove carbon dioxide from the Earth's atmosphere, it's important to understand why we might need to do so.

The key to this is the 1.5C heating limit that most countries signed up to in Paris in 2015. To stand a chance of keeping global warming below that level, there's only so much more CO2 we can afford to pump into the atmosphere. This is the "carbon budget".

If we exceed the carbon budget, global temperatures will rise beyond 1.5C. As Dr Valérie Masson-Delmotte, co-chair of Monday's Working Group One IPCC report put it," every additional tonne of CO2 emissions adds to global warming".

But as Monday's report noted, climate scientists have high confidence that reducing the concentration of CO2 in the planet's atmosphere would lower global temperatures.

"We're talking about CO2 removal because it will be needed to compensate for emissions from 'hard-to-abate' sectors, such as agriculture, aviation or cement, and to bring the temperature back down if we ‘overshoot’ climate targets like 1.5 degrees," Rob Bellamy, Presidential Fellow in Environment at the University of Manchester, told Euronews Next.

"To halt temperature increase at any level we need to achieve net-zero CO2 emissions," said Oliver Geden, a lead author on the IPCC's upcoming WG3 report that focuses on mitigating emissions and fellow at German Institute for International and Security Affairs.

"Since the remaining carbon budget to limit the increase to 1.5C is almost empty, we will likely need to go deeper than net-zero. For 1.5C, net negative emissions aren't a distraction, they will be essential," he told Euronews Next.

Monday's report mentions a number of methods of removing CO2 from the Earth's atmosphere. They all follow the same basic principle of absorbing carbon from the air and keeping it locked away.

These range from low-tech methods like planting more trees that take in CO2 as they grow to industrial solutions like growing crops that capture CO2, burning them for fuel, capturing the CO2 that releases and piping it to permanent storage under the sea floor – a process known as BECCS.

Since the remaining carbon budget to limit the increase to 1.5C is almost empty, we will likely need to go deeper than net-zero. For 1.5C, net negative emissions aren't a distraction, they will be essential.

And this is where the picture gets more complicated. Many critics point out that the technologies needed for CDR methods like BECCS and direct air carbon capture and storage (DACCS) are not yet in a state to be used at the necessary scale.

"The bioenergy bit of BECCS is already being used, its CCS component is less mature," Bellamy said.

"It's currently at the demonstration phase, and uncertain as to when it might be usable at scale. But, as an indication, the UK's Committee on Climate Change considers deployment in the 2030's to be a 'sensible' scenario," he added.

"The issue for BECCS is sustainable biomass, the issue for DACCS is bending the cost curve (like with solar PV and wind) and getting enough low carbon energy to run installations," Geden said.

Some opponents say focusing on tech like BECCS and DACCS diverts crucial energy away from the effort to slash carbon emissions.

Last year, charity Friends of the Earth criticised a UK government plan to invest £100 million (€118 million) in researching DACCS technology that could suck CO2 directly from the air, branding it a distraction.

"It’s a bit like sailing a ship towards an iceberg and the captain on the ship telling you not to worry about the iceberg as he would soon invent a machine that will help you fly. It’s ridiculous. We shouldn’t hope some magical solution will come in the future," the charity's head of science Mike Childs told media.

Can trees save us?

In the meantime, surely tried and tested methods like afforestation (planting trees) and restoring peatlands – both natural carbon sinks – can pick up the slack?

Well, yes and no.

"There's a lot of afforestation potential, and other forms of biological CDR, but in a warming climate, these forms of CDR are very vulnerable to reversal," explained Geden.

In simple terms: trees are great at locking carbon away - unless they catch fire, something that climate change makes far more likely to happen.

According to Bellamy, the amount of time a carbon store locks the greenhouse gas away is also an important factor.

"These 'natural' solutions tend to be short-term stores," he said.

"There are also lots of uncertainties around monitoring, verifying and reporting the actual amounts of carbon removed. Even if you assume they work as intended, they still wouldn't be enough. We need engineered solutions too, and lots of emissions reductions!"

"[The] deployment of CDR, particularly on land, can also affect water quality and quantity, food production and biodiversity," Monday's IPCC report said, hinting at other problems posed by CDR methods.

Global poverty watchdog Oxfam highlighted the potential impacts in a report published earlier this month, arguing that "net-zero" commitments by rich countries and big corporations could place a heavy burden on the world's poor.

More than that, Oxfam's report claimed that it would be "mathematically impossible" to find enough vacant land to meet the world's current net-zero targets.

"Oxfam has calculated that the total amount of land required for planned carbon removal could potentially be five times the size of India, or the equivalent of all the farmland on the planet," it said.

Environmental charity Greenpeace has previously claimed that carbon capture and storage (CCS) technology is a distraction from the business of cutting emissions, saying that it could prolong the life of fossil-fuel energy sources like coal and gas.

In a 2015 report, the NGO claimed that the cost of retrofitting CCS tech to existing coal-fired power plants was the most expensive way of avoiding CO2 emissions, almost 40 per cent more per kilogram of avoided CO2 than with solar panels, 125 per cent more than wind, and 260 per cent more than geothermal energy.

More recent figures from the United States appear to back this up.

In its 2021 assessment of the construction cost of various energy sources, the United States' Energy Information Administration (EIA) estimated that building a coal power plant with 90 per cent CCS worked out at a cost of $5,970 (€5,094) per kilowatt-hour (kw/h).

For Bellamy, the risk of CDR being used as an excuse to carry on emitting CO2 is a concern.

"Which is why it's important to separate any targets for carbon removals from targets for emissions reductions," he said.

"But it doesn't get us away from the fact that we are going to have to use CDR if we are to meet net zero and/or avoid overshoot.

"The question is no longer about whether we should do CDR or not, it's about figuring out how to do it responsibly".