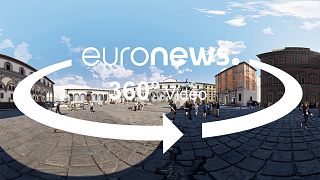 Some academics are fond of likening Italy's culture heritage to a mine because of the huge potential wealth it holds for both academic study and the economy.

And hi-tech virtual reality head sets will help fill the gap between that heritage and the general public's awareness of it.

In this 360° video you can tour Florence's Santissima Annunziata Square's Istituto degli Innocenti, or the Institute of the Innocents, a sixteenth century Renaissance children's orphanage.

It was the first of its kind known in the world, and for centuries it led the way as an example to other countries in how to care for children.

Now 3D modelling, virtual reality and new methodologies developed by researchers at Ferrara University working on the "Inception Project" are virtually re-creating this unique building for people to explore.

It will also allow would-be tourists a chance to virtually tour a site they might never otherwise visit and see with their own eyes.

"Virtually visiting a place is not the same as visiting it in reality, being there, touching it, but immersive reality, digital and virtual technology, can help to get a close feeling," says Roberto Di Giulio, an architect and the Inception Project's chief coordinator.

"There are many archaeological sites in Italy and Europe that are visited very little, bringing new visitors to some of these places would be an achievement."

Remote visits would also mean virtual tourists are more likely to look at the less popular sites that they otherwise might not bother with.

And then there's the great advantage of downscaling mass tourism, which has become a real problem for some of the most popular destinations in Europe such as Barcelona and Venice.

This 360-degree video was shot with a GoPro Fusion