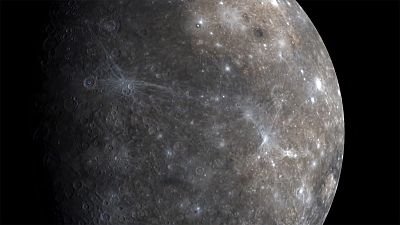 Mercury is a planetary misfit, an oddball in the solar system, and this month the BepiColombo mission is setting off to study it in unprecedented detail.

The best images we have of Mercury are from NASA's MESSENGER mission, which pictured its cratered surface and curious features earlier this decade.

​Now, the joint European and Japanese BepiColombo mission is heading there to take an even closer look.

One of the planetary scientists involved in the mission, Jörn Helbert from the German Aerospace Centre DLR, explained to Euronews why BepiColombo was so exciting.

For planetary scientists that is really driving us crazy, because you have seen that one part, and you don’t know if the rest is the same or something completely different," Helbert says.

​There is a lot to learn, because Mercury just doesn't fit our ideas of how planets evolve.

​"At least for me, it is a mystery how this planet formed, how it has evolved over millions or billions of years," says Helbert's colleague and fellow DLR Planetary Scientist, Dr. Hauke Hußmann.

​ESA and JAXA each has a separate probe on board BepiColombo. ​They'll fly together to Mercury, a seven year cruise around Venus and the Sun, before braking into orbit.

​It's a tricky journey, fraught with risks.

​"One special thing about Mercury is that it is a very fast rotating planet around the Sun. And so on one hand we are braking against Sun's gravity, but on the other hand we have to speed up our spacecraft that we fly together with Mercury. When we are there then we can put our two orbiters in the dedicated orbit to do their best for science," says ESA's Bepicolombo Project Scientist Johannes Benkhoff.

​Once in the heat of Mercury's orbit, the probes go their separate ways. ESA's will fly close to the planet, while JAXA's will observe from a distance.

​A total of 16 instruments are on board, more than any previous Mercury mission.

​Hauke Hußmann from the German Aerospace Centre, DLR, will use a laser altimeter to scan the craters, valleys and plains below.

​That 3D surface model will be used to study one of the most intriguing aspects of Mercury - the fact that it appears to be shrinking. It has been calculated that Mercury now has a radius seven kilometres less than when it was formed.

​"The planet is contracting or shrinking, and at the surface we believe we see these features as a consequence of this shrinking. That is one of the points that we would like to understand. Is it something typical for planets, or is it something unique on Mercury?" wonders ESA's Johannes Benkhoff.

450 degrees in the daytime

​Another key goal of BepiColombo is to understand what's to be found on the surface of Mercury.

​The scientists at the DLR in Berlin have purpose-built a special chamber which can heat samples to 450 degrees Celsius, the daytime temperature on Mercury.

​"We’re going to a very hot surface, we want to have laboratory data which we can actually compare. When we get data back from our instrument, what do we actually see? Because we don’t get a sample back. It’s not like the Moon where we actually have a sample back. The only thing we can do is we can look from afar."

"We look at something that’s very, very hot, so we need to actually look at materials at the same temperature as you get on Mercury, which, as you can imagine, is not an easy task to do," says DLR Planetary Scientist Jörn Helbert.

​Previous missions made a few surprising discoveries: they found water ice on the poles in craters that never see the Sun, and observed far less iron and much more volatile materials like sulphur and potassium than anyone expected.

So the readings taken in this lab in Berlin will be compared with BepiColombo's spectrometer to work out what Mercury is made of.

​Jörn Helbert shows us the instrument which will do the job: ​"This actually is our development model. So it's basically identical to what we fly in space, It's the same size, the same material, the difference right is we have glass so you can see what's happening inside," he says.

"The part that will look at Mercury, if you look inside you actually see that it’s very reflecting. It’s very reflecting because we basically don't want to get the heat of the planet in our instrument. So we try to get rid of as much heat as possible, so we built this very reflective shield, what we call a 'baffle', which basically reflects sunlight, all the heat of Mercury, so light is really the only thing that really goes in the centre and reaches our instrument."

​Excitement is building over what we can learn about Mercury and its origins in our solar system. In particular scientists want to know how geologically active it is.

​NASA's MESSENGER mission spotted volcanoes and signs of gases bursting out of hollows on its surface. Is that what's really going on?

​"With BepiColombo that is one of our goals. When we map these hollows which are already mapped by MESSENGER, and we see differences, then we would find proof that even today there's something ongoing on Mercury. And that would be a fantastic result," says Johannes Benkhoff.

​"One of the reasons why I like working on Mercury is that we need to understand Mercury in order to understand how planets formed. If we have a model that forms all planets, but not Mercury, that model is basically useless, because you need to get that one as well,"says Jörn Helbert.

​The long journey to answer those questions is only just beginning.

​BepiColombo will use the gravity of Earth, Venus and Mercury itself to gradually swing into position, and will only enter orbit in December 2025, when the real science measurements begin.

Is there life out there? We head to 'Mars on Earth' to find out