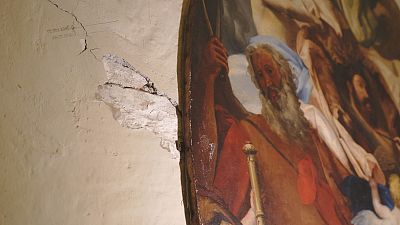 Old town quarters, such as in Gubbio, Italy, are a matter of local pride and an irresistible tourist attraction. But are we at risk of losing our historic heritage to climate change?

The 14th century Palazzo dei Consoli is one of Gubbio's most iconic buildings, hosting art and archeological exhibitions. But the cracks appearing in its stone walls are raising concern that the ground under the palazzo may be shifting. This could be caused by climate change, as rains are becoming stronger and more frequent. The city takes this threat very seriously.

Filippo Mario Stirati, the Mayor of Gubbio, says: "Gubbio is a city made of stone — it's an element that is most precious to us. We have to keep it under control."

Scientists from Heracles, a European research project, are studying the effects of climate change on ancient monuments. Their methods range from satellite monitoring that indicates ground shifting to electromagnetic scans and local samplings of walls, with a pressure-sensitive drilling tool.

According to Giannis Grammatikas, Conservation Scientist, at the University of Crete explains the benefit of taking samples: “First of all, this shows how hard the stone is. After this, a chemical analysis of the drilling residue will reveal the mineralogical composition of this stone, showing possible products of erosion — like soluble salts.”

Gubbio knows very well how rain can bring down stone walls. In the past, parts of the ancient city's defence perimeter have already collapsed under the weight of shifting ground. Rains have weakened the mortar, and stones are falling out. What remains of the city wall is now carefully monitored.

Francesco Tosti, a Civil Engineer from Gubbio's local authority, says the rains have had an adverse effect: "Over the past three years, we had many extreme weather events, the precipitation was much above average. This is affecting the wall structures that should be maintained."

Gubbio isn't the only place where scientists are working to understand the climate threat.

Climatic fluctuations are particularly menacing in coastal areas, rich with monuments, such as Koules, the Venetian fortress in Crete, says Euronews' Denis Loctier.

We joined scientists in the Mediterranean Sea for a deeper understanding of what is taking place.

The waves hitting the 16th century fortress are constantly eroding its walls. Changing climate shifts the wind direction and the pattern of waves. What does this mean for stone structures? Some clues may be found at the seafloor. These researchers are using sonar to find out how the sea is affecting stones underwater.

Stelios Petrakis, a Coastal Oceanographer at Forth-IACM explains what they are looking for on the seabed: "This sonar allows us to understand the image of the seafloor. On the scans, we can clearly see cavities in underwater fortifications. Through repeated surveys of this area, we can observe how these cavities are evolving with time. This way we can keep tabs on the erosion."

It's all about wave energy

At the seafloor, the researchers have installed sensors that are continuously recording water temperature and wave height. Twice a year, scientists are making dives to retrieve data from these sensors.

It's all about wave energy, says George Alexandrakis, a Coastal Oceanographer at Forth-IACM: "We need this data for our digital model to see how waves affect the Koules fortress. We need to know the wave energy the fortress receives. By combining this with past measurements, we can make short- and long-term projections and see how the wave energy will evolve due to the climate change."

After the data has been copied, researchers place the sensors back at the seafloor for another six months of monitoring.

Some of the effects can be detected inside the fortress. Scientists flash a powerful laser on a wall surface. This turns its particles into plasma that can be chemically analysed.

Panagiotis Siozos, a Physicist at IESL-Forth, says: "The sodium chloride, salt, accumulates in the wall surface. That's one of the effects of the sea on the fortress. Water that penetrates the wall and changes its chemical structure, which also significantly affects the monument."

Local authorities use the data collected by scientists to get a better idea of how to maintain this site. There are concerns that with climate change, old stone buildings will degrade faster, making their upkeep more expensive.

"We already conducted a large restoration campaign here. Our aim is to keep monitoring the building to see when more measures will be necessary. Our ultimate goal is to find a way to protect this monument for the next 500 years."

The Knossos palace, site of the Minotaur's Labyrinth, was partially restored 100 years ago with reinforced concrete. Climate extremes are now weakening the cement, causing the iron to rust. To preserve this site, new types of cement and mortar are needed.

Says Elisabeth Kavoulaki, Archaeologist at the Ephorate of Antiquities of Heraklion: "Our research project will help to create new materials and make them available to restorers so that we’ll finally have a solution suited for this particular monument. That would help us better protect our heritage."

Scientists have developed new mortar, adding nano- and microparticles that improve weather resistance, and new cement, which is similar to the one used originally — but less porous, so air cannot penetrate it as easily.

"These practical results can be used directly at this archeological site — one of the most important, most significant for Europe, the site of the first European civilisation in the Mediterranean basin," says Giuseppina Padeletti, Researcher in Nanomaterials at CNR-ISMN, Heracles Project Coordinator.

Venice is another cultural treasure trove threatened by climate change. But there also are other problems, on a much smaller scale, where new technologies can provide a solution. Such as inside the Peggy Guggenheim Collection.

The famous modern art museum on the Grand Canal features works of Italian futurists and American modernists — paintings as well as sculptures. Some of the experimental materials and techniques used in contemporary art make their preservation particularly challenging.

The Museum's director, Karole Vail, explains the problem: “In the 20th-century art, there were a lot of new materials used, so that makes it maybe a little bit more complicated than in previous years. It’s particularly important to take care of it — for the public, and for future generations.”

Today, the priceless paintings are protected behind glass. But in Peggy Guggenheim's time, they were often exposed to the elements. Some of their original brightness has been lost due to dust and grime — which can be very difficult to remove.

Luciano Pensabene Buemi, Chief Conservator at the Peggy Guggenheim Collection says: "This Jackson Pollock painting presents a conservation problem, because he painted with very thick materials, as you can see here. Through the years, dust was settling onto these paints, consolidating with them.”

To solve this problem, the conservators were helped by scientists working on another European research project called Nanorestart. One of Pollock's paintings at the Collection has already been cleaned using this specially developed hydrogel.

Maria Laura Petruzzellis, Conservator for NanoRestart at the Peggy Guggenheim Collection explains the gel's properties: “The fact that this gel is very flexible allows it to adapt to the surface - as you see here, it adapts to the shape of my fingers. And it’s very elastic, which allows us to position it and it won’t break when we remove it. It also leaves no residue on the surface, which is a big advantage for the safety of the work of art.”

Unlike traditional methods such as cotton buds, the hydrogel doesn't leave any fibres trapped in the painting surface during the cleaning. It's safe for skin, and, most importantly, the gel removes dust quickly and efficiently.

The gel was developed at the University of Florence. It was developed the hydrogel with materials commonly used in medical applications, such as contact lenses.

A fine-tuned production process creates necessary micro- and nano-scopic structures inside the gel.

“These two structures are important because the liquid must flow through these channels, and travel between different cells inside the gel, says Piero Baglioni, Chair of Physical Chemistry at the University of Florence.

"By modifying these two structures, we can determine the final properties of the gel,” he adds.

This method can assist conservators with more than just cleaning. Hydrogel soaked with a solvent allows experts to carefully remove a piece of sticky tape from a fragile piece of artwork without damaging its surface.

Paper Conservator Antonio Mirabile says: "It's possible to apply the gel and achieve an extremely slow release of the solvent, giving the restorer more control over the work, — in this case removal of the adhesive tape."

The potential of this nano-structured gel goes beyond art restoration - it can be used, for example, to remove coatings from various surfaces which is a common engineering application.

Baglioni says: "We’re already receiving requests from various reseller companies that would like to exclusively distribute this product in Europe, China or India. We feel there is a huge potential for this product."

From planetary-scale climatic changes to microscopic specks of dust — scientists are fighting many battles defending the heritage of our art and history.