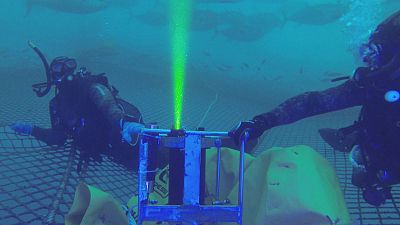 <p>European scientists say they have developed a new type of camera which is able to produce high quality underwater images even in low visibility conditions.</p> <p>The team of researchers behind the <a href="http://www.utofia.eu">European project</a> are working with Spanish bluefin tuna producers. </p> <p>Tuna fish are strictly monitored. Farmers say the device could make a huge difference by improving the images and information relayed back to them about the fish. </p> <p>“It’s very important for us to know the exact quantity of fish entering our farm. The farm is composed of different cages. We decide on a quota for the farm and we cannot let a kilo more than that enter,” says Tuna producer, Francisco Sánchez-Luengo Leví. </p> <p>The current ways of monitoring fish, like tuna, lack precision. </p> <p>The process can also be very time consuming. But researchers believe the new compact camera – which uses light waves to collect data in its field of vision – will change all that.</p> <blockquote class="twitter-tweet" data-lang="en"><p lang="en" dir="ltr">The <span class="caps">UTOFIA</span> prototype is already able to capture 3D information of dynamic underwater scenes! Watch video here: <a href="https://t.co/VbMK2nTu9Y">https://t.co/VbMK2nTu9Y</a></p>— <span class="caps">UTOFIA</span> Project (@UTOFIA_H2020) <a href="https://twitter.com/UTOFIA_H2020/status/765157729841319936?ref_src=twsrc%5Etfw">August 15, 2016</a></blockquote> <script async src="https://platform.twitter.com/widgets.js" charset="utf-8"></script> <p>“The laser pulses many times a second. This is controlled by the camera. The camera also opens and shuts its own sensor… it can calculate the distance from the camera to the object. In reality, it calculates the time it has taken for the light to travel and come back,” says Marine biologist, Iñaki Quincoces. </p> <p>The technology therefore fills a niche between conventional cameras that have good resolution, but a short range, and sonar devices, which can film long distances, but have low resolution. But this camera doesn’t only produce beautiful images, it also collects data, reconstructing 3D objects which can later be analysed. </p> <p>“I can see the tuna at different distances, because there are different colours. Not only does it give you the distance, but it also gives you the 3D object. This is better for calculating the volume, the weight of the animal, and that’s very interesting for us,” Quincoces says. </p> <p>In addition to monitoring fishing quotas, the technology should give producers precise and up-to-date information on how the tuna grow. Another feature is the camera’s ability to achieve outstanding picture quality, even when the water is murky and full of particles, as José Maria Ferarios, an expert in marine technology at <span class="caps">AZTI</span>, explains. </p> <p>“At lower depths we need light. But the light emitted from the camera projects itself onto particles, either suspended or on the sea bed. For the first two metres this creates a big reflection. This would stop a conventional camera from working. However, this device is able to cancel those first two metres out. It is able to see beyond this field where the reflection is so intense.”</p> <blockquote class="twitter-tweet" data-lang="en"><p lang="en" dir="ltr">Compact, powerful, real-time – <span class="caps">UTOFIA</span> ready for testing. Read more in our newsletter <a href="https://t.co/y1mc8w4WMC">https://t.co/y1mc8w4WMC</a> <a href="https://t.co/Ndgk6SlBIQ">pic.twitter.com/Ndgk6SlBIQ</a></p>— <span class="caps">UTOFIA</span> Project (@UTOFIA_H2020) <a href="https://twitter.com/UTOFIA_H2020/status/938687086424666112?ref_src=twsrc%5Etfw">December 7, 2017</a></blockquote> <script async src="https://platform.twitter.com/widgets.js" charset="utf-8"></script> <p>Researchers hope the new technology will be on the market in less than five years. </p> <p>Its range of use could also be wide: in addition to fish farming, the camera could be a vital tool in identifying underwater pollution and studying biodiversity on the seabed. </p> <blockquote class="twitter-tweet" data-lang="en"><p lang="en" dir="ltr">Our project <a href="https://twitter.com/UTOFIA_H2020?ref_src=twsrc%5Etfw"><code>UTOFIA_H2020</a> was made possible thanks to <a href="https://twitter.com/hashtag/H2020?src=hash&ref_src=twsrc%5Etfw">#H2020</a> <a href="https://twitter.com/hashtag/InvestEUresearch?src=hash&ref_src=twsrc%5Etfw">#InvestEUresearch</a> <a href="https://t.co/VcuQ1aMjkd">pic.twitter.com/VcuQ1aMjkd</a></p>— UTOFIA Project (</code>UTOFIA_H2020) <a href="https://twitter.com/UTOFIA_H2020/status/927544828312907776?ref_src=twsrc%5Etfw">November 6, 2017</a></blockquote> <script async src="https://platform.twitter.com/widgets.js" charset="utf-8"></script>