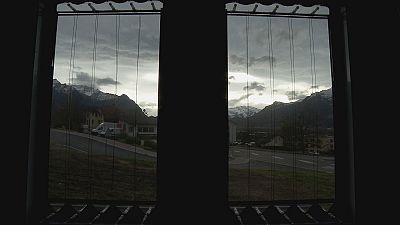 <p>This edition of Futuris comes from Liechtenstein to look at a project that is developing windows which could provide a source of energy.</p> <p>Euronews correspondent Julian Lopez Gomez spoke to those involved and saw an example of the windows mounted on a container.</p> <p>“It is a very windy day in Liechtenstein. We’ve come here to film this container. Looks like an ordinary container but it is not. And it is due to these windows. They have have been injected with special fluids. The outer face of the window is this way able to collect solar radiation and transform it into energy<br /> and the inner face is able to cool or heat the space inside the container,” he said. </p> <p>The windows are fed with a circulating fluid that can be dyed. So they turn into an active tool for energy saving. And not only that. </p> <p>“Windows can be shaded, so they protect against sun rays. Then they also heat or cool down the interior. And they can be turned into solar collectors. They absorb solar radiation and use it for the energy consumption inside the building,” said Anne-Sohie Zapf, architect, University of Liechtenstein, and <a href="http://www.fluidglass.eu/">Fluidglass</a> project coordinator. </p> <p>In ideal conditions each window can produce up to 1 kilowatt of energy per hour. </p> <p>The fluid inside the window glasses is a mixture of water, anti-freeze and magnetic particles. </p> <p>Scientists say their main challenge was to ensure its long-term stability. So they looked for particles with very precise features. </p> <p>“The particles shouldn’t agglutinate, by that I mean they shouldn’t clump together. They shouldn’t deposit over time on the window, but stay in a solution, and, if needed, they should be easily filtered out,” explained Daniel Gstöhl, Mechanical Engineer <span class="caps">NTB</span>. </p> <p>And then it was also necessary to ensure that the fluid was injected into the windows in safe, homogeneous, efficient ways. </p> <p>“The main difficulty was to find the correct operating mode. The glass shouldn’t be operated under pressure, because in this case it would deform over time, and we wouldn’t have the regular distribution of the particles. Which means that we had to operate the whole thing under low-pressure. So the whole circuit changes from high to low pressure. And then other problems appear that also need to be addressed,” said Stefan Frei, Mechanical Engineer, <span class="caps">NTB</span>. </p> <p>Sophisticated computer models were also needed to determine to what extent, and under which conditions, the shading windows can better manage inside temperatures.</p> <p>“We confirmed that you don’t need any additional heating or cooling system, as for example an air conditioner or a heater. That was already one of the important things that we could determine on computers. And now that has to be validated with the real tests in the container,” stressed Laura Baumgärtner, Civil Engineer, University of Liechtenstein. </p> <p>These real tests, performed in Vaduz in winter and Cyprus in summer, will show if the shading windows are indeed able to heat and cool down the space inside the container. </p> <p>And while waiting for the results, researchers are already thinking ahead. </p> <p>“We expect the main application could be in multi-story office building with a high percentage of glass surface in their facades. But we’ll need to find solutions, as the wind makes it difficult to shadow buildings with large glass surfaces.</p> <p>‘Anyway we see large office buildings as our main target, as individual houses have less glass surface, and to become efficient, our system needs as much glass surface as possible,” Anne-Sophie Zapf, Architect, University of Liechtenstein, Fluidglass Project Coordinator, pointed out.</p> <p>Scientists say these energy efficient windows could become a market reality in less than four years.</p>

Liechtenstein takes on the world's most powerful countries at the UN

In Liechtenstein, 38,378 of the world's wealthiest go to the polls