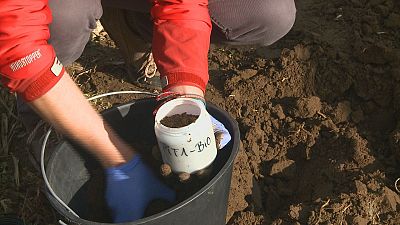 European scientists have been digging deep so they can better understand the multiple threats facing soil which include erosion, pollution, decline of biodiversity and urbanisation. The scientists want to come up with better preventive measures.

Soil scientists, soil biologists and agricultural engineers. They are all engaged in a comprehensive research effort to understand what’s happening under our feet.

And together with other colleagues around Europe, they are not short of work.

“We end up with a collection of 25000 samples from all over Europe that are analysed to study their physical, chemical and biological properties,” explained Oihane Fernandez Ugalde, agricultural engineer from the Joint Research Centre and added: “We try to select the sites to give a homogeneous representation of all European countries. They are also selected according to their land cover, the soil use, climatic conditions and the different types of soils they have.”

One of the sites, for instance, is an agricultural soil a freshly harvested corn field.

And, researchers say, it bears scars from one of the main enemy of soils-erosion.

Rain, inappropriate agricultural practices and topography combine each year to remove around 2.4 tons per hectare from the surface of fertile soil across Europe.

“We are able to advise the farmers on what practical ways they can follow to stop erosion. We can summarise them – try to reduce tillage; after the harvest leave the plant residues on the field and lastly we also advise farmers to protect grass margins. It is better to leave grass in the borders of their fields,” said Panos Panagos, soil erosion modeller, JRC

The scientists from the Joint Research Centre aim at accurately understanding what is happening under our feet so the European Union can better determine policies for a good and sustainable management of its soils. And much, researchers say, is at stake.

“So most people think about soil as the source of food, because, for example, 99.9 percent of the calories that we eat come from land-based agriculture.

‘However, soils also perform other functions, such as cleaning water; they mitigate the effects of flooding, they combat climate change by sequestrating carbon dioxide out of the atmosphere and locking it in the ground. And they also buffer us from the effects of pollution,” Arwyn Jones, soil scientist, JRC pointed out.

To achieve those goals, soils have to be in good health. A good indicator is the biodiversity that they host.

So researchers also take samples under forests, for instance, for further biological analysis.

“We estimate that in a hectare of soil there are around 5,000 kilos of living organisms. That corresponds more or less to the weight of some 100 sheep,” said Alberto Orgiazzi, soil biologist, JRC.

“Reading DNA sequences extracted from soil we are able to understand to what living organisms that soil is linked, and we can accurately identify what those organisms are. This way we can characterize biodiversity,“Alberto Orgiazzi added.

Atlases, interactive databases, models, recommendations for policy makers and public awareness campaigns are the final results of a research effort bound to keep digging deep into our soils’ secrets.