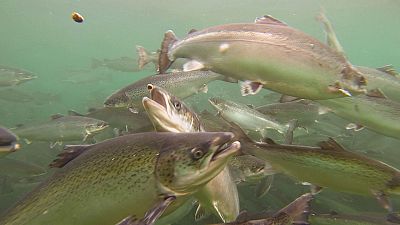 Fisheries are an excellent source of fresh and tasty fish that won’t harm marine resources. But can we be sure that these fish are safe to eat?”

In Norway, the sea water is cold, fresh and clean – perfect for the local salmon industry which plans to increase its production fivefold in the coming years.

Aquaculture is considered more efficient than cattle farms as a source of protein for the growing world population – but there is one important concern.

“In many places in the world, the water is polluted, due to human activity – and there’s plastics, there’s chemicals, there’s all kinds of waste products from our activity coming into the water. Fish, one way or another, are eating it and accumulating it. And once the fish is eaten by humans, it can be a potential threat to human health,” said Reinier van den Biggelaar, Managing Director of Hortimare.

A European research project is investigating new threats and looking into ways of dealing with them by removing contaminants from the water.

Adjacent to the fishery, is an experimental seaweed farm. The fast-growing algae reaches a length of two metres and has numerous potential uses, such as removing metals from the water.

“Seaweeds are natural filters. They absorb many different chemicals, organics, inorganic stuff, in the water. They take it out. The seaweeds here grow on the phosphate and nitrate as a byproduct of salmon farming; that’s a nice combination of salmon and seaweed in close proximity. But they do take out other materials also,” added Biggelaar.

So how big is the risk of water contamination for fish and other seafood? Scientists are trying to answer that question by focusing on poorly researched contaminants from relatively new chemical substances.

Dangerous stuff which gets into the water ranges from flame retardants to pharmaceuticals and personal care products, as well as toxic metals and micro-plastics.

António Marques, project coordinator for ECsafeSEAFOOD told euronews: “Seafood is generally known to be healthy and a high-quality product. However, some of it can be contaminated. And so far only a few contaminants are formally regulated. There is insufficient data available on many other chemicals released into the environment.”

Some toxins found mostly in tropical areas have now spread to Europe. At one lab in Cascais, Portugal, scientists simulate ocean warming and acidification to find out their exact effects on the marine life.

“In that tank there, we’re simulating the normal temperature and normal pH of seawater, and in this one here we’re simulating ocean warming,” biologist Ana Maulvault told a euronews camera crew.

“Both of the aquariums are being polluted with a mixture of impurities which you can normally find in the marine environment. When we’re finished, we’ll be able to compare the extent of contamination in each tank,” said Maulvault who works for the Portuguese Institute for the Sea and Atmosphere.

An ongoing study of fish samples from different European countries has shown that several areas around large cities and ports are already noticeably polluted.

Researchers use expensive equipment unavailable to small companies, but they’re also working on cheap biosensors that in the near future will help anyone to find out whether our seafood is still safe to eat.

Do you know: do fish feel global warming?