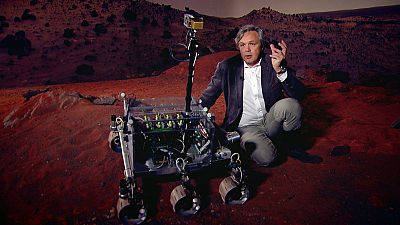 <p>The ExoMars 2016 mission will try to answer one of the toughest and most intriguing questions of space exploration: is there or has there ever been life on Mars?</p> <p>Getting to Mars, landing there safely, and then beginning the search for life is a huge scientific and technical challenge for the huge team behind <a href="http://exploration.esa.int/mars/">ExoMars</a>, a joint <span class="caps">ESA</span> and Roscosmos project to search for life on Mars. It is the world’s biggest ever mission to the red planet.</p> <p>The first spacecraft is almost ready and Maurizio Capuano, the ExoMars 2016 Program Manager, accompanied Euronews’ on a privileged close encounter with the probe at Thales Alenia Space’s facility in Cannes, southern France. </p> <p>“This is ExoMars 2016 which next year will land on the red planet. The lower part will go into orbit around Mars, putting out its solar panels to get energy from the sun, and the upper part is the lander which will land directly on the Martian surface completely autonomously,” he explained. </p> <p><strong>Two stage mission</strong><br /> ExoMars is split into two missions; the first in 2016, the second in 2018. The spacecraft’s creators are on a tight test schedule as there is only a narrow window of opportunity to reach the target. </p> <p>“To go to Mars you have to wait for the right conjunction of Earth and Mars, and taking into account the orbits of the two planets, favourable conjunctions only happen every 26 months,” said Richard Bessudo, another of the mission’s program managers.</p> <p>Once at Mars, the spacecraft will split in two, with the satellite staying in orbit as the lander heads for the surface. <span class="caps">ESA</span> hopes this test capsule will perform Europe’s first ever controlled landing on Mars. </p> <p>Capuano invokes images of 1950s B movies to explain the lander: “It has a form that makes you think of spaceships, of <span class="caps">UFO</span>s if you like, because the aerodynamic shape of the object is the best way to control the entry in the Martian atmosphere.”</p> <p><strong>Quest for life</strong><br /> ExoMars 2016 will send back crucial information on how the lander performed. Meanwhile the 2016 orbiter acts like a giant nose, sniffing the Martian atmosphere for methane. The gas could be a clue to <a href="https://www.youtube.com/watch?v=6UE6pB_p3T8">the possible presence of life</a>. </p> <p>The 2016 findings will be vital to the success of the ExoMars rover mission, which is planned to be launched in 2018. </p> <p>“ExoMars 2018 is really opening a new chapter in Mars exploration,” said Jorge Vago, an ExoMars Project scientist. “For the first time we will address the third dimension, which is depth. This is very important, because it is in the subsurface, and at depth, that we have the best chance of finding evidence for the possible past presence of life on Mars.”</p> <p>Sending a machine to dig down into Mars is difficult and its <a href="http://www.popsci.com/science/article/2012-08/mars-rover-curiosity%E2%80%99s-biggest-challenge-mars-itself">very first hurdle is considered the greatest:- landing safely</a>. Then the ExoMars rover will need to gingerly find its way around. </p> <p><strong>Secrets below the surface</strong><br /> The rover will aim for a landing site halfway between the Martian hills and the low-lying plains. It will look for places where water should be below the surface, and then it will drill down up to two metres.</p> <p>“The drill speed is quite low, when you compare to the drill that you use at home, let’s say for home work, explained Pietro Baglioni, ExoMars Rover Manager. “The drill is operating with 50-60 Watts, so it’s the power that you use for a bulb of a lamp normally. And it’s capable to do a great job, to dig a hole and get a sample.”</p> <p><span class="caps">NASA</span>’s Curiosity rover has confirmed the habitability of Mars. So ExoMars will search for fossilized evidence of microbes, and hunt for traces of organic molecules.</p> <p>Jorge Vago said Mars secrets will be revealed at a microscopic level. <br /> “The microbes themselves would be too small to see, there are sizes in the range of one to a few microns, so you would need a big fat microscope to be able to see them, something we don’t have on our mission. But colonies of organisms can affect the deposition of rocks, and that we will be able to see. The other type of biosignature is organic molecules, and here you have to think of them as the Lego bricks of cells. “</p> <p><strong>The big question</strong><br /> The ExoMars rover can also spot any present day life on Mars, hidden beneath the surface away from harmful radiation. Is that even possible? Is there life on Mars? Pietro Baglioni is among the ExoMars experts who believe it is: “It’s of course the 100 million dollar question. I am convinced that there has been life on Mars.” </p> <p>His view is echoed by Vargo: “I think there is a reasonable chance that there may be some pockets of life deep in the subsurface.”</p> <p>However, Capuano is not convinced: “Personally I don’t think there’s life on Mars, but that’s my personal opinion.”</p> <p>The ExoMars mission could settle that beguiling question by the end of the decade.</p>

The Astronaut Academy: "If anything goes wrong, it goes really wrong"