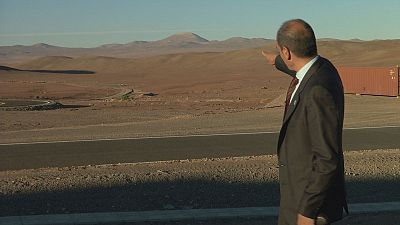 The Atacama desert in Chile is famous for nothing: no water, no plants, no animals. That makes it a perfect place for astronomy, and the ideal location to build the European Extremely Large Telescope, or E-ELT, the world’s largest ever optical and infrared telescope.

The first stage of construction is destruction, namely blowing up the top of a mountain.

Rob Ivison is Director of Science at the European Southern Observatory: “The reason we’re blasting the top off the mountain is to make way for a structure that dwarfs anything we’ve ever built before.”

Roberto Tamai the E-ELT Programme Manager described the moment the summit went up: “Probably from here, 25 kilometers away it appeared ‘Ppfff’, but we were blasting 5,000 cubic metres of rock, something like 11,000 tonnes of rock, that went into the air.”

The rocks in question are now scattered at the summit of Cerro Armazones. The 3,000 metre mountain will soon have a 150 metre diameter platform at its summit.

There the European Southern Observatory will construct the E-ELT. It is as tall as a football stadium, with an enormous 39 metre mirror made of almost 800 individual pieces.

“Build it, do it, make it available for science, that’s my role,” says Tamai. It sounds easy, but the challenges are significant:
“We are really in the middle of nowhere, we have to create the road, we have to create the platform, we have to create everything in order to host the platform. It will difficult to manufacture the pieces, in Europe or wherever it will be; difficult to transfer here, a long chain of containers of pieces, manufacturing here on site; dry, very dry, lots of sun, radiation; and then integration on the top of that mountain,” he concludes.

If it’s so remote and inaccessible, with a landscape that looks more like Mars than Earth, why did ESO choose to build its massive new telescope here?

The E-ELT will be operated from ESO’s Paranal observatory, 25 kilometres away, a desert oasis that featured in James Bond film Quantum of Solace

Quiet by day, it comes to life at dusk, as the VLT – or Very Large Telescope – opens to the skies, and the astronomers get to work.

Each night they collect data for scientists in Europe, observing everything from distant galaxies to planets in our solar system.

Valentin D Ivanov is a Support Astronomer at ESO. While the VLT already offers him and his colleagues a powerful tool, he believes the E-ELT will be a game-changer: “There are stars that we can actually just barely, barely detect from space, or from the ground, we can never take a spectrum with what we have now. With the E-ELT we will be able to do that, we will be able to do so many more things…it’s breathtaking.”

So how does the E-ELT compare to the finest telescopes in space?

Machines like the joint ESA- NASA Hubble have an uninterrupted view of the universe from orbit.

And what is more, like its successor JWST, it can see wavelengths that we can’t see from the ground.

But the E-ELT will gather more light, and see sharper detail.

Stephane Brillant is an Astronomer, ESO: “In certain areas space is very important, to observe what we call the thermal infrared for example, and space is very good for observing in ultraviolet. But there are areas where we can observe in higher resolution from the ground, we can use different techniques, different areas that I wouldn’t say are in competition, but are complementary.”

Ewine van Dishoek, Professor of Astronomy at Leiden University agrees: “Many astronomers will be using space and ground based data to complement each other. That’s what they’re doing now as well, people are using data from the Hubble Space Telescope, finding very faint objects, then going to the VLT in order to take a spectrum of it.”

Some of those very faint objects the astronomers are looking at are in fact planets orbiting around other stars.

These exoplanets will be a key target of the E-ELT when it’s built in a decade’s time.

Ewine van Dishoek, Professor of Astronomy, Leiden University continues: “One of the main developments in astronomy over the last five years has been the discovery of an enormous diversity of exoplanets. We now know that they look very different from maybe our Earth, or Mars, or Venus, or Jupiter.
“And so what the E-ELT will be able to do is characterise these planets. Now we only have hints at what’s their nature is, but the E-ELT will really be able to measure their atmospheres and see what they are made of.”

Rob Ivison is Director of Science, ESO: “We will be able to image planets going around other stars for the first time, we’ll be able to determine whether they have any signs of life. And of course in the context that we live our lives, that will change everything. It’ll be a different world, knowing that we’re not alone.”

The quest for life elsewhere goes on – with space and ground telescopes soon joined by the E-ELT, in the almost lifeless Atacama desert.