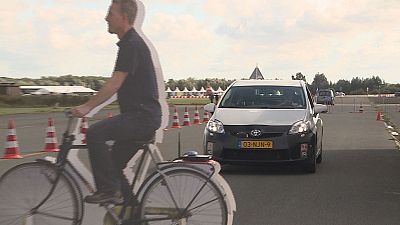 <p>Cars are becoming smarter; automatic systems like self-parking or adaptive cruise control are already on the market, and many new technologies are being tested and are soon to come on line. </p> <p>Carmakers have joined with research institutes and state regulators in a European project to speed up the deployment of “intelligent driving”.</p> <p>Maurice Kwakkernaat, a researcher in integrated vehicle safety at <span class="caps">TNO</span>, explained more as he drove a test vehicle around a track in the Netherlands: “In this car we have equipment to control the vehicle, to communicate with other vehicles, to position it, and also to log all this information. Here on the roof we have antennas for communications, positioning… and here in the front of the car we have sensors like cameras and the radar and they’re use to detect objects near the vehicle.”</p> <p><div id="fb-root"></div> <script>(function(d, s, id) { var js, fjs = d.getElementsByTagName(s)[0]; if (d.getElementById(id)) return; js = d.createElement(s); js.id = id; js.src = "//connect.facebook.net/fr_FR/all.js#xfbml=1"; fjs.parentNode.insertBefore(js, fjs); }(document, 'script', 'facebook-jssdk'));</script> <div class="fb-post" data-href="https://www.facebook.com/euronews.fans/posts/10151852102913110" data-width="550"><div class="fb-xfbml-parse-ignore"><a href="https://www.facebook.com/euronews.fans/posts/10151852102913110">Publication</a> de <a href="https://www.facebook.com/euronews.fans">euronews</a>.</div></div> </p> <p>If cars can communicate with each other and with roadside infrastructure, driving will become safer and greener. At an industry event on a Dutch airfield, developers from many EU countries presented their technologies.</p> <p>Maurice Kwakkernaat added as he drove: “What you see right now is that I’m not touching the pedal, the car is in automatic mode. The only thing I’m doing is steering.” </p> <p>One system replicates the speed of the car just ahead – so the distance always remains the same, as Kwakkernaat explained: “What happens is the information from the car in front of us – its speed, the acceleration, braking – is communicated to this vehicle; that information is combined with sensor information from this vehicle – the radar, the camera. And as you see right now, the other vehicle brakes and we do exactly the same thing, so we follow automatically.”</p> <p>Smarter roadside infrastructure can improve traffic and save fuel. In a demonstration, an approaching car talks wirelessly to the traffic lights at the intersection, making the red light switch to green. The onboard computer confirms that there is no need to stop. For heavy trucks, every traffic stop avoided is a litre of fuel saved.</p> <p>Siebe Turksma, a research coordinator with Imtech Traffic & Infra, said: “Imagine every car can talk to every other car, every car can talk to every traffic light, every car can talk to the signs on the road, and the signs can talk back to your car. By using the anonymous information from all these cars, the network can be managed a lot better. So the roads will be more effective when these systems are deployed widely.”</p> <p>Other road users – cyclists and pedestrians – will be able to carry wireless markers that will prevent accidents – even in poor visibility, as Maurice Kwakkernaat explained with the help of another demonstration: “This bicycle is equipped with the communication units that you see here – the black box: it has an antenna to transmit its information, and a <span class="caps">GPS</span> receiver. This information is combined and it’s transmitted to the vehicle that’s approaching this crossing. So, here the bicycle approaches the crossing from behind the truck, like this…”. As Kwakkernaat spoke the driver of the approaching car received the ‘brake!’ alert from his onboard computer. His car came smoothly to a halt automatically just in front of the test bike. </p> <p>Gabriel Simcic, project coordinator with iMobility Challenge, foresees a merging of technologies: “I think this is the future – cooperative mobility and more automation. And we will get there. We really think that automation is a plus, is an assistance. If you look at all the transportation modes – aviation, rail – this is already introduced, and this is what is causing the fact that there are such few accidents in these transport modes. We have a lot of accidents on the roads, and it’s mostly because of the driver.”</p> <p>The technology already exists. Now it is up to the industry and regulators to implement it, and for society to accept the idea of cars making their own decisions.</p> <p>Learn more at the iMobility Challenge website: <a href="http://www.imobilitychallenge.eu">www.imobilitychallenge.eu</a></p>