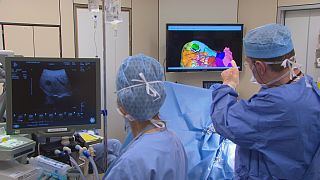 “The tumour on my liver was in a place which was difficult to access,” explains Emile Boucqueau.

“I have really tiny blood vessels. So surgeons were afraid that surgery would maybe not be successful,” says Francesca Nembrini.

“They told me that I had many cysts, but that there was nothing that they could do. So I just waited,” explains Teresa Oliveira.

Now there is a powerful tool to fight such personal dramas, virtual physiology.

This is the story of the secrets of a new generation of sophisticated medical computer models and the hope they offer.

At a Brussels hospital, surgery is a daily routine but it is unlike any other. Surgeons are surgically removing a tumour in a liver.

A 3D computer model is guiding them to look at the tumour itself, for the surgeons it appears as a green spot surrounded by blood vessels.

“The images let us anticipate the way the blood arrives and leaves the tumour. So the objective is to plan exactly the area of the liver from which the cancer will be removed while preserving a maximum of healthy tissue,” explained Jean-Jacques Houben, Digestive surgeon at the Edith Cavell Hospital.

He added: “It is much more precise. It is like a GPS system on a car which takes you to the exact location having first recognised the co-ordinates.”

This and other models are the result of a European Union Research project aimed at developing virtual tools to improve the surgical approach to different liver diseases.

The technology has even been upgraded in Strasbourg where there is an audiovisual control room in a hospital research centre.

Live pictures from surgery are merged with 3D computer models of the patient’s liver.

The mixed picture is sent back in real time to the operating theatre so that surgeons can use it straight away.

“The surgeon knows exactly where to go, whereas normally human bodies are not transparent. He sees behind the surface of the organs or the position of the blood vessel or tumours. So it is safer,” says Luc Soler, Coordinator of the PASSPORT project.

The 3D computer models not only offer better surgical training and practice, they also help to determine eligibility for surgery. That, researchers say, is already saving lives.

“In the past, anatomy text books said there are eight main areas in the liver. When there was a tumour in one of the areas it was assumed the whole area had to be removed completely. Surgeons said if we didn’t do that the patient was at risk of dying due to liver failure.

“But in reality we found each patient has a variable number of areas. We can personalise this software to each person’s anatomy. Now we can operate on patients on whom we couldn’t before,” says Luc Soler.

That was the case for two patients in Brussels. Emile had cancer in one area of the liver, Teresa has a genetic disease that causes her liver to be covered with cysts.

3D personalised models helped to perform surgery while they are used routinely in both patients’ medical check ups. Teresa explained: “Doctors were able to confirm (with these 3D models) that cysts covered most of my liver. They said that if I hadn’t gone under surgery, I would have had to receive a liver transplant.”

While looking at a 3D picture of the liver, Dr. Houben told us: “You can see the vascularisation of this healthy liver, and the liver is functioning. Also we can see clearly how this part has practically doubled in size since we removed the cysts which compress the blood vessels.”

“Before, it was certainly very difficult to see all this by keyhole surgery, we always had to explore a little. But here the surgeon has a vision of the vascular system of the liver that is much more accurate since it is three dimensional.”

Further South, a different problem in an equally sensitive human organ. Francesca and Paolo met at the nephrology unit of a hospital in Bergamo.

They suffer from serious renal disease, and both need hemodialysis to clean their blood from waste.

“I started coming to the hospital three days per week, four hours of hemodialysis every day. Three months ago I changed the regime. Now I come here three nights every week, eight hours of dialysis every night,” Francesca says.

Surgery in the arm is needed to guarantee the vascular access to hemodialysis.The operation is sometimes far from simple.

“My brother and I have small veins. They are difficult to isolate and to connect to the fistula that is then linked with the dialysis equipment. It is called ‘vascular access’. I was lucky I had good access after surgery just once. But my brother needed it three times to have correct vascular access,” explained Paolo Beretta.

For hemodialysis to be effective, the patient’s blood flow has to reach a minimum threshold.

Preparation for surgery is done routinely with the help of ultrasound and clinical exams.But this does not always guarantee its success.

Stéfano Rota, Nephrologist at the Bergamo Riuniti Hospital explains: “A vascular access that is not able to provide at least 300 millilitres of blood per second, is inefficient. It just does not work for hemodialysis. If this blood flow can not be reached, we need to intervene again, either from a clinical, surgical or pharmacological point of view. We need to ensure patients have an efficient vascular access.”

Computer scientists have rushed to meet the needs of these patients and doctors. Researchers have developed computer models able to predict each patient’s blood flow before they undergo surgery.

The system can even predict what part of the patient’s arm will provide more blood flow and how that blood flow will evolve over time, weeks or months after the surgery.

“We have so far succeeded in predicting the blood flow quite accurately. There is scarcely a 15 percent difference in the rate between our predicted blood flow and the real blood flow after surgery. But this accuracy can still be improved. For that we’ll have to increase the number of clinical measurements performed on the patients,” explains Andrea Remuzzi, Coordinator of the ARCH project.

“We’ll be indeed able to improve the calculation in two different ways. Concerning the system itself, ultrasounds now measure blood speed in just one point of the vascular system. But in the future we’ll be able to measure that flow at different points and different speeds. On the other hand, we’ll be able to provide more accurate data by improving the existing mathematical models to more complex one,” points out Anna Caroli, a mathematician at the Mario Negri Institute.

“This technology will allow us to improve surgical practice when dealing with vascular systems in the heart, in the brain, or in other parts of the body. Surgeons will be able to predict in advance what to do in the case where a blood vessel is suddenly altered. They will be able to know – before surgery – if they need to use a bypass, or if they need to reconstruct a blood vessel, or use a prosthesis,” concludes Andrea Remuzzi.