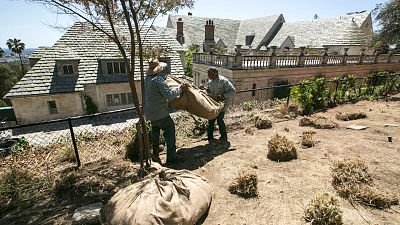 Los Angeles in California is taking a novel approach to conserving water. After suffering months of drought, residents are now restricted to watering their gardens and plants for only eight minutes a go, two days a week. So where do the police come in?

They are patrolling the streets and issuing fines to anyone who isn’t watering by the rules.

"It starts with a warning citation. And then after that it starts at $200. The next violation is $400. And then the one after that is $600." says Los Angeles Department of Water and Power (LADWP) agent Damon Ayala.

But Ayala says this isn’t a money-making scheme.

“We're not looking really for their money - that doesn't get us more water. We're trying to get behavioural change."

Why is watering gardens restricted in California?

In the state of California, average water use is about 50 per cent environmental and 40 per cent agricultural, while only 10 per cent is urban. Officials have however stressed that residential savings really do add up.

Outdoor watering, in particular, is the biggest water-waster in urban areas, and drought-tolerant and ‘California-friendly’ landscaping can save up to 85 per cent more water than grass, according to the Metropolitan Water District of Southern California.

"Unfortunately, folks are looking at gravel, so they're taking out their landscape completely. They're looking at artificial turf, which is absolutely the wrong thing to do."

Do LA residents obey the rules?

The restrictions, approved by a 13-0 City Council vote after being announced by Mayor Eric Garcetti, are the city’s strictest-ever outdoor watering limitations.

"A lot of times they don't know about the ordinance. And that's our job, to educate them,” he says.

"The reality is that these kinds of gardens would be fine on that amount of water, in fact, could do with less, but our traditional lawns can't survive on that."

The restrictions are clearly having an effect, LADWP officials announced that demand for water from city residents plummeted 9 per cent in June compared with the same month last year, the lowest water use for any June on record.

Watch the video above to learn more about California's water police.

Residents in Monterrey ‘desperate’ for water amidst drought