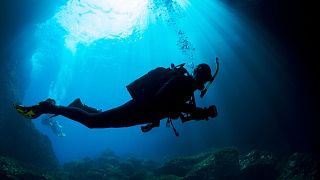 Divers in Denmark are hand-planting seagrass at the bottom of the ocean, to replace the once lush beds that carpeted the seafloor.

An estimated 90 per cent of underwater meadows has been lost at Vejle Fjord, on Jutland's east coast, over the last 30 years. This is because of years of degradation due to wastewater pollution from farms and households.

As part of a five-year project, run by the University of Southern Denmark (SDU), volunteer divers are working on restoring the seagrass beds and the wildlife that once thrived among them.

“The eelgrass, or the seagrass, is fundamental to life in Vejle Fjord and our inner seas in Denmark," explains Mads Fjeldsoe Christensen, a biologist and project manager from local authority Vejle Kommune. "It's like a nursery for the small fishes. It's like the forests of the sea."

Why seagrass is essential for the marine environment

The more than 70 species of seagrasses are among the most poorly protected, yet make up many of the world’s coastal habitats. They can capture and store carbon better than any other plant. Seagrass sequestration of carbon is 35 times faster than the rainforest - it's an incredible carbon sink.

"We know that the fixation of carbon is just as much as it is in the rainforest of Brazil, so there is a huge potential," says Fjeldsoe Christensen.

Seagrass sequestration of carbon is 35 times faster than the rainforest - it's an incredible carbon sink.

One scientific estimate even says an acre (which is just over half the size of a football field) of seagrass can sequester 335 kg of carbon per year. That’s the same amount emitted by a car travelling 6,212 kilometres.

Seagrass is also essential for wildlife that use the underwater forests as a habitat.

However, seagrass meadows are threatened by coastal development, overfishing, runoff from farm waste, and the growing threat of climate change.

They have declined roughly 7 per cent annually since the 1990s.

Spreading the seeds underwater didn't work, so this project is hoping to restore what's lost by planting new seagrass shoots individually by hand.

The project has been running for three years. This year, they invited volunteer divers to lend a hand.

The team takes surviving grass from remaining beds, then volunteers wrap individual shoots around a degradable iron nail onshore, so divers can easily pin them to the sea floor.

And they are already seeing some success - at a similar project in a nearby fjord, after little more than two years, plant density grew 70 times higher and fields with transplants extended by approximately 30 per cent.

Watch the video above to see how divers are planting seagrass under the water.