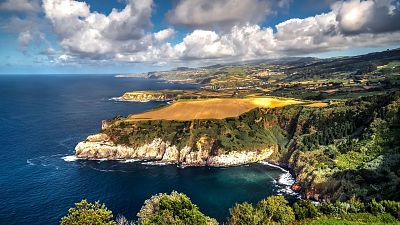 Filled with uncertainty, experts are scrambling for answers to explain unusual seismic activity that has rattled the mid-Atlantic volcanic island of São Jorge, in Portugal's Azores archipelago, for over two weeks.

The island has been hit by nearly 27,000 small tremors as of Tuesday and there are fears the activity could herald a volcanic eruption for the first time since 1808, or a powerful earthquake.

"It's an enigma, a mystery," says seismologist Joao Fontiela, explaining multiple tremors were common on other Azorean islands but not in São Jorge. "I still haven't found a clear answer."

"Going from a very small number of earthquakes to thousands is extraordinary," he adds.

Going from a very small number of earthquakes to thousands is extraordinary.

The volcanic alert is at Level 4, meaning there is a "real possibility" the volcano could erupt. But when, where on the island and if it will actually happen are questions that remain unanswered, says Fontiela.

So far, all the recorded earthquakes have been of tectonic origin and not volcanic, reaching a magnitude of up to 3.8. If they become volcanic, it means magma is on the move.

The number of daily quakes has decreased in recent days but experts are not sure if that trend will continue.

Ground deformation has already been detected, which is unusual given the tremors' tectonic origin and low magnitude, according to Fontiela.

The lack of previous studies about São Jorge is making it harder to understand the phenomenon.

Geologist Jose Madeira said it was not clear what kind of eruption could take place, adding that previous seismic events in São Jorge in 1580 and 1808 were marked by deadly pyroclastic flows (fast-moving currents of hot gas and volcanic matter that flow along the ground at speeds of 100 km).

The São Jorge earthquakes are happening at average depths of 8-12 kilometres. If a significant number start occurring closer to surface, it might indicate an imminent eruption, according to neighbouring island Madeira.

Authorities have warned the situation could drag for an undetermined amount of time.

Where are The Azores?

The Azores, an autonomous region of Portugal, are an archipelago in the mid-Atlantic ocean.

The islands are characterised by dramatic landscapes, fishing villages, green pastures and hedgerows of blue hydrangeas.

There are nine major Azorean islands and an islet cluster, in three main groups. These are Flores and Corvo, to the west; Graciosa, Terceira, São Jorge, Pico, and Faial in the centre; and São Miguel, Santa Maria, and the Formigas Reef to the east.

São Miguel is the largest and is famous for its Gorreana Tea Plantation.

São Jorge, where the tremors are happening, is famous for it’s fajas – coastal plateaus which are home to many of the island’s smaller villages. The fajas were formed by ancient landslides in the north where the sea cliffs are steepest, creating the best natural swimming pools in the Azores.