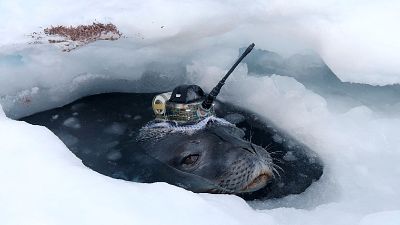 Japanese researchers have found a way to carry out oceanographic research under the thick ice of East Antarctica; by deploying seals with antenna on their heads.

Ocean circulation plays a key role in how marine ecosystems develop but it is very poorly studied in the Southern Ocean due to extreme weather conditions (Antarctica holds the record for the lowest measured temperature on Earth, −89.2 °C).

"During the summer, we can go to Antarctica on icebreakers to conduct actual research activities, so that we can collect data there. But during the winter, such things cannot be done in so many places," says project leader Nobuo Kokubun from the National Institute of Polar Research based in Japan.

The scientists came up with a project where they equipped eight Weddell seals with satellite data loggers. The loggers - attached to their heads - weighed about half a kilogram and were about the size of a small Rubik’s Cube.

The eight seals wore the equipment from March to September 2017, which is winter in the southern hemisphere.

The data successfully delivered to scientists included information about water temperatures and salt levels, in areas with extremely harsh environmental conditions. This helps scientists to learn more about the flows of water and nutrients around these regions of the southern continent.

The data also showed that one of the seals had travelled as far as 633km (393 miles) from the coast of Japan's Showa Station in Antarctica, while another had descended to a depth of 700m (2,297 ft).

A study describing the investigation technique and the researchers’ findings appeared in the journal Limnology and Oceanography in late 2021.

Click on the video above and watch the seals at work.

Freya the walrus: Boat-sinking giant up to mischief in Oslo