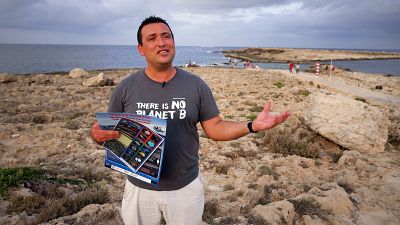 To improve that, he says it's vitally important to raise public awareness about the state of our seas, especially with regard to pollution and climate change.

...if it wasn't for the ocean, climate change would be much worse

"There's one important fact to keep in mind. And another thing is that the ocean is soaking up a lot of that extra carbon dioxide and other greenhouse gases that we're spewing up into the air through the burning of fossil fuels, if it wasn't for the ocean, climate change would be much worse because of higher CO2 concentrations in the atmosphere.

So when you make people aware of these things, you turn them into ocean-literate citizens. You obviously, you know, start changing their mindset and also their behaviour and way of life to try to become change themselves, to bring about change themselves," Deidun says.

They're really popular. They really managed to inspire people.

It connects a diverse range of organisations, projects, and people, to help improve the public's knowledge and create debate about what’s happening to our seas.

And Professor Deidun says, if we're to change the tide, it's about inspiring people to find out more.

"So in that way, you are acquiring the scientific data, but the person sending you the report is getting something in return, because they're getting a greater awareness about the sea. You know, they're getting this informal education, and you would be amazed about how popular citizen science campaigns are. They're really popular. They really managed to inspire people.