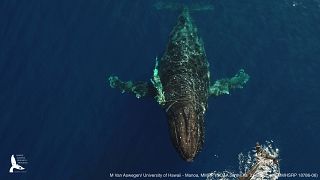 An ocean rescue team have helped a female humpback whale escape certain death after it became entangled in marine debris off the coast of Hawaii.

The National Oceanic and Atmospheric Administration's (NOAA) rescue team found the whale on the 14 February. It was travelling with a male and a calf in the Hawaiian Islands Humpback Whale National Marine Sanctuary around Maui.

The whale had a 152-metre line wrapped tightly around its head, along with various other kinds of marine debris that accumulates in the waters around the US state. The agency said tight wraps on the head make the job especially dangerous for the trained response teams that have to approach the whales to cut them free.

In this case though, the rescue team were eventually successful in freeing the female whale.

Entanglement is the biggest threat to whales

Entanglement is the main human-caused threat to whales. The International Whaling Commission estimates that worldwide 300,000 whales, dolphins, and porpoises die from entanglements each year.

Entangled whales can starve or drown due to restricted movement, physical trauma, and infections.

As an estimated 10,000 humpback whales migrate from Alaska to the Hawaiian Islands where they are known to breed every winter. And with increasing levels of marine debris, NOAA rescue teams have an increasing number of marine mammals to save.

Two weeks before saving this female, on the 26 January, they fought to free a yearling humpback whale from a life-threatening entanglement in mooring gear in the waters near Maui.

The whale's tail and fins were wrapped in a 43-metre line with a plastic buoy attached. Trained responders cut the gear off with a blade attached to a pole after getting close enough.

However, they warn that rescuing these mammals puts their team members in a life-threatening situation and nobody should attempt to rescue these animals without the proper training.

Officials said the whale was in good condition but that the line wrapped around its tail had begun to cut into the animal's flesh. The gear was of "considerable weight," the agency said.

Watch the video above to see how the team are fighting to free whales.

Meet the flying sea turtle who travelled 8,000 kilometres to Scotland