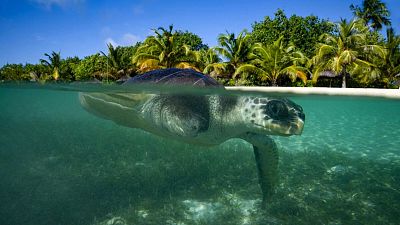 An Olive ridley sea turtle with a missing flipper has embarked on a life-changing journey to the Scottish Highlands.

April - as she is now known - travelled by plane from the Turtle Rehabilitation Centre in the Maldives to the SEA LIFE Aquarium in Loch Lomond - a journey of over 8000 kilometres.

Despite efforts to return her to the wild, severe injuries caused by plastic pollution at sea meant she desperately needed a long-term home.

And when the Scottish facility heard of her plight, they were keen to greet her with open arms.

“We are thrilled to welcome April to the Loch Lomond family,” says Kathryn Angel, General Manager of the SEA LIFE Aquarium.

“To have a turtle in our facility once again is a real pleasure.”

When April was first discovered by members of Marine Savers - a marine conservation team based out of the Four Seasons Resort Maldives - she was floating on the ocean surface, entangled in netting.

Despite the loving care April received at the Centre, ongoing buoyancy issues made a return to the wild impossible.

Instead, the Marine Savers’ Flying Turtles Project arranged for April to jet off to a new home in the UK.

The continent-spanning journey saw April leave the Maldives by speedboat, travel via plane to Glasgow, before receiving a traditional bagpipe welcome in Loch Lomond.

“We’re so proud of the hard work and dedication of our team, ensuring the magnificent creatures in our waters are cared for and live a happy danger-free life, and April is yet another example of this,” adds Angel.

“We’re so excited to introduce her to our guests once she’s completely comfortable with her new surroundings.”

Watch the video above to find out more about April’s journey.