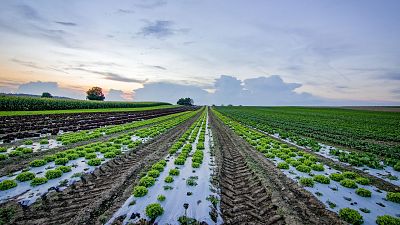 Soil health is just as important as human health on our planet.   -   Copyright  Canva   -
The opinions expressed in this article are those of the author and do not represent in any way the editorial position of Euronews.
By Ronald Vargas  •  Updated: 16/02/2022

Ronald Vargas is a leading global soil scientist who has dedicated over 25 years to natural resources management with a special focus on sustainable soil management. He is Secretary of the Global Soil Partnership (GSP) at the UN’s Food and Agriculture Organisation (FAO) and a passionate advocate for the importance of food security and nutrition.

Healthy soils feed the entire food chain, from the food we eat to the water we drink and even the air we breathe. Conserving and restoring their natural balance requires urgent action for the survival of every living organism.

This much is clear to me, having invested over 20 years of my working life trying to explain why protecting such a vital resource and its ecosystems is an SOS climate emergency – because preserving our soils is like ensuring we have enough life support machines in our hospitals.

I followed November's COP26 climate change conference in Glasgow, Scotland, with a mixture of interest and expectation. The outcome was not as anticipated despite all the consciousness about reducing emissions. It is our collective duty to fight climate change.

At the UN’s Food and Agriculture Organisation (FAO) Global Soil Partnership – we position soil health and the adoption of sustainable soil management practices as one of the viable solutions to at least reduce emissions from the agriculture sector. A sector which accounts for around one third of global greenhouse gases emissions.

Given that soils constitute the biggest terrestrial carbon sink on the planet and hold huge power to mitigate non-CO2 greenhouse gas emissions, they have a role to play.

It takes thousands of years for soils to form, meaning protecting them is pivotal to our very existence. About a quarter of all the animal species on Earth live beneath our feet and provide all sorts of nutrients, meaning soils simultaneously produce food, store carbon, and purify water.

A quarter of all the animal species on Earth live beneath our feet and provide all sorts of nutrients, meaning soils simultaneously produce food, store carbon, and purify water.

The soil has the potential to sequester 2.04 gigatonnes of CO2 equivalents - or 34 per cent of global agricultural emissions. Put simply, soils have a massive potential to lock-up CO2, stopping it from being released into the atmosphere with harmful consequences. If soils are managed sustainably, the carbon they already store will be retained.

By increasing organic carbon in our soils, in croplands and pasturelands - we can increase the fertility and productivity of the land. There’s currently around three times more carbon in our soils than in the atmosphere and we want to keep it there.

Fighting climate change is not just about mitigation and emission reductions, it is already happening - so we must also learn to adapt to the changes it brings.

In December, we marked the UN’s World Soil Day. Why do we feel the need to put a date in our diaries every year to stress just how important soils are? The answer is simple. Because the fate of our planet, from its ecosystems, natural resources, biodiversity, and people hinges on the state of its soils.

The fate of our planet, from its ecosystems, natural resources, biodiversity, and people hinges on the state of its soils.

Our soils, quite literally, not only directly or indirectly provide us with most of our food - but are also central to the planet’s life-support system. Soil is an integral component of the carbon, water, and nutrient cycles, which allow organisms of all sizes to survive and thrive.

This is why we need to think more deeply about the ground below our feet.

What are the threats to soil?

When plants and animals decompose, their bodies release nutrients into the soil for subsequent generations of organisms to use and recycle. Soils store, filter and purify our water, helping to protect against flash flooding by absorbing rainwater.

By acting as a storehouse for carbon they help to offset the shocks of climate change and save us from some of the potentially worst outcomes of human-driven carbon emissions.

But our soils are under threat from human activities like deep ploughing, which pierces and destroys the natural structure of soils, or the overuse of agro-chemicals which kill off the biodiversity we need to balance out ecosystems.

The overuse of agro-chemicals kill off the biodiversity we need to balance out ecosystems.

FAO estimates that one-third of our agricultural soils have been damaged over the past 40 years. And, if we don’t act now that trend will continue.

Soil degradation causes poverty by triggering rural to urban migration. Food security, climate change adaptation, and even sustainable development are jeopardised when people are forced to flee because they can’t farm their land to feed themselves or make an income.

I am based in Italy but have lived in Kenya, Somalia and the Netherlands and I was born in Bolivia. In each of these countries I have seen soils become degraded by negative human interventions, leaving them vulnerable to erosion by extreme weather. I have seen soils seep into rivers and the sea.

What can we do to keep the world’s soil healthy?

This year we dedicated World Soil Day to salt-affected soils, which occupy approximately 834 million hectares of the world’s total land area. The main menace is that salinisation is a growing concern due to unsustainable agriculture practices, largely related to irrigation with low-quality water and seawater intrusion. Salinisation greatly reduces soil productivity and the provision of ecosystem services by soils.

Solutions are in sight. We need to adopt good practices that are country-based and are the result of a combination of scientific and local knowledge – re-setting the balance and harmony of our soils.

It is an everyday job to raise the voice of soils, our silent ally. It’s time to scale up investments in sustainable soil management to have healthy soils that operate as change agents addressing all the global challenges.

From climate change, food insecurity, pollution, land degradation and biodiversity loss, to poverty – this is what we are facing if we don’t act now.