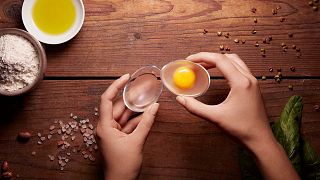 If you’ve embarked on veganuary this year, chances are that eggs are one of the few things you’ve given up on.

Unlike milk, chocolate or even cheese, natural eggs are notoriously hard to replicate. But a new formula means that the foodstuff could be coming to a supermarket shelf near you before the end of the month - complete with yolk and shell.

French biologists Philippine Soulères and Sheryline Thavisouk decided to take advantage of the booming market for vegan alternatives as part of a project at Paris's Ecole de Biologie Industrielle in 2017.

The duo created Le Papondu - a play on the verb 'pondre' meaning to lay, with 'pas pondu' indicating the eggs were not laid by any hen. Formerly called Les Merveilloeufs (meaning marvellous eggs), the company had to change its name according to a legal ruling on food transparency in 2020.

"When creating [Le Papondu], the most complicated aspect was making sure they could match up when it comes to cooking.

Hens’ eggs are used in such a variety of different ways, which means they are hard to replicate," the inventors told Euronews Green.

It took more than 50 test recipes and three years to reach a stage where the product was recognisable in its current form as something consumers would want from an egg, the creators said.

The final recipe of their vegan-friendly egg is still in development, but the pair revealed that it will likely be based on vegetables.

Despite their egg alternative being completely free of hens and cocks, they've managed to maintain a remarkable likeness to an egg, with a distinct white and yolk, setting it apart from competitors that replicate only one functionality. For example, Oggs made with aquafaba are designed for use in baking, while Just's egg replacer is made with mung beans and comes mixed, ready to scramble.

The eggs even come in their own shells which the creators are hoping to make from recycled materials - ditching the plastic that was used for the prototype.

Soulères and Thavisouk decided to make a business out of their idea, partnering with incubator programme Station F. Their crowdfunding campaign was successful and now Le Papondu is on the verge of appearing on supermarket shelves.

The latest update from the company indicated that they were aiming to sell the egg by the end of 2021, so we can egg-spect the foodstuff any day now.

'Peak meat': Plant-based alternatives will take over Europe by 2035