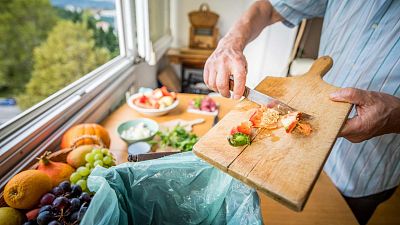 From January 2022, new rules come into effect in California which will require people to recycle their food waste. It will then be composted or turned into renewable energy.

All organic waste, including banana peels, chicken bones and leftover veggies, emit methane as they decay. And in its first 20 years in the atmosphere, methane has 80 times the warming power of CO2.

About 40 per cent of food is currently wasted in the United States, and once that food reaches landfill it creates about 15 per cent of the nation's methane emissions, according to the U.S. Environmental Protection Agency.

To reduce greenhouse gas emissions from landfills, the state of California passed a law in 2016. The law requires local governments and entities that collect rubbish to have mandatory food recycling programs in place as of January 2022. Some rural areas where bears could pose a problem are among those exempted from the law.

The goal is to turn these food scraps into compost or energy.

Many cities will provide residents, in single-family homes and apartments, with countertop food waste bins that can hold around two days worth of scraps. They can then dispose of them in green waste bins alongside yard waste.

Once the food is in the green waste bin, it will go to a facility that can compost it or use anaerobic digestion to turn it into green energy.

Cities will then be required to buy back some of the product, creating a resource loop that advocates say is more climate-friendly and economically sensible than simply throwing food waste in the bin.

How is food waste tackled around the world?

A third of all food produced in the world is never eaten because food is spoiled or discarded, according to the Food and Agriculture Organisation.

California has the largest recycling program in the US, but the state is not the first one to launch such an initiative. It joins eight other states in the US, which have laws requiring some reprocessing of food waste, to keep it out of landfills and cut down on greenhouse gas emissions.

France made headlines in 2016 by banning large supermarkets from throwing away edible food. Instead, they are now obliged to donate the food to local charities and organisations.

Portugal has recently launched a programme for children teaching them about food waste and encouraging behavioural change.

Some Asian countries are ahead of the curve too. South Korea, for example, recycles 95 per cent of its food waste. While Japan has had a food recycling law since 2001, which promotes turning organic waste into compost or energy.

The campaign has seen restaurants discouraging people from ordering too much and social media videos showing people eating excessive amounts of food have been banned.

Watch the video above to learn more about California's food recycling programme.